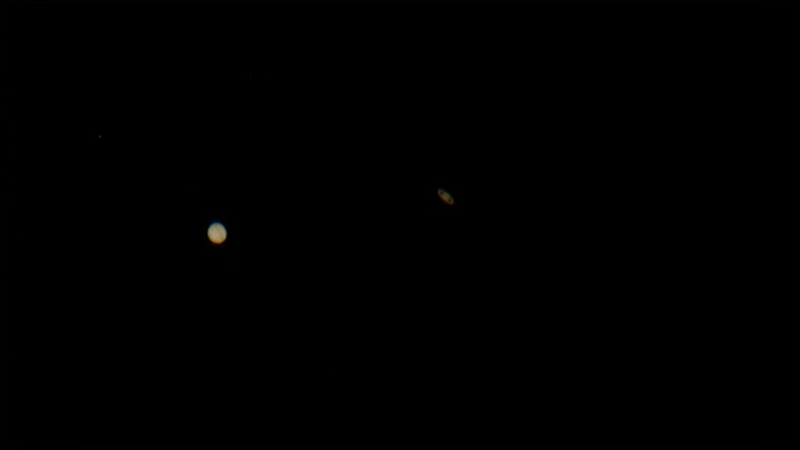 LOS ANGELES -- If you're a stargazer, you were treated to a once-in-a-lifetime spectacle Monday night.

The two biggest planets - Jupiter and Saturn - aligned in the night sky, appearing closer than they have in centuries.

The pair appeared like a double planet, a phenomenon astronomers call "the great conjunction," but the two gas giants are still 456 million miles apart.

This phenomenon has also been dubbed a "Christmas Star" in reference to the celestial light that guided the three wise men to Jesus in the Christian Bible's nativity story.

Stargazers gathered at the Griffith Observatory for a chance at getting a glimpse of the "great conjunction."

Our sister station ABC7 captured the rare sight, which won't happen again until 2080, in the sky over Los Angeles, and you could even see Saturn's rings in their helicopter footage.

Dozens gathered at the Griffith Observatory as well to catch a glimpse of the celestial site that hasn't been seen since the Middle Ages.

"From the naked eye, it looks like two little dots. But up close, it's like seeing pictures in the books -- kind of looks like that actually," said Ryan McCray of Irvine. "It's pretty incredible view. Glad I'm got to experience."

Stargazers soaked up the rare scene.

"With the naked eye, you couldn't tell they were two different things there, but with a camera, you can see Saturn's rings and actually one picture showed Jupiter's moons," said Hawthorne resident Nancy Carlos.

Many people also took to their backyards and parks to capture the show in the sky.

John Bush in Orange recorded a view of the heavenly sight coming on the winter solstice.

"For me, any astronomical event is a time to connect with the consciousness and energy of the universe," said Scott Hammond of Larchmont.

In these turbulent times, the rare conjunction joining so many in hoping it's a sign of a brighter future.