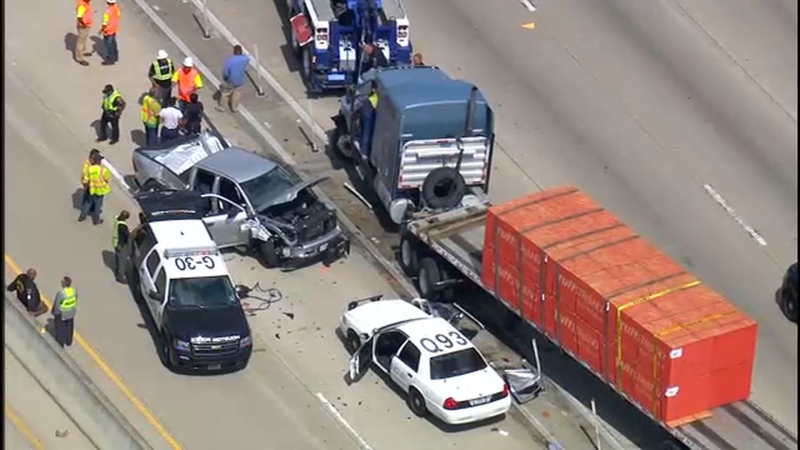 A 3-year-old girl and a 8-year-old boy were flown to the hospital by Life Flight after a 5-vehicle crash, which included an 18-wheeler, in west Harris County.

It happened Tuesday around 7 a.m. on I-10 westbound at Greenhouse Road. The freeway was shut down for hours but reopened around 11:45 a.m.

According to Lynn Nguyen, Chief of Vehicular Crimes, a white truck stopped in a moving lane of traffic because a water bottle was stuck underneath the driver's brake and gas pedals. The driver put on his hazard lights as he tried to remove the bottle.

A second and third car were both able to stop and did not hit him. However, a fourth vehicle, a gray Dodge Ram pickup truck, couldn't stop in time and crashed into them.

An 18-wheeler that was unable to avoid the wreck also hit the Dodge truck, causing it to spin. The 3-year-old and 8-year-old were riding in the Dodge pickup.

Both children were flown to Memorial Hermann Hospital, where they remain in critical condition. The 3-year-old has a brain hemorrhage and the 8-year-old has a skull fracture.

The drivers are okay. They have not shown signs of intoxication, according to authorities.

An investigation will determine if the driver of the silver truck was speeding.

Officials did see a car seat, but they don't know if either of the children were restrained.

Charges are possible, pending the outcome of the investigation.

Follow Erica Simon on Facebook and Twitter.
Report a correction or typo
Related topics:
harris countytrafficcrash
Copyright © 2022 KTRK-TV. All Rights Reserved.
TOP STORIES
Daylight shows home destroyed after standoff with shooting suspect
What we know about man accused of shooting 3 HPD officers
Widow delivers heart-wrenching eulogy for NYPD detective
Suspect arrested after 30-minute chase ends on I-45 in Texas City
Rainy Monday and arctic cold front on the way after sunny weekend
5 people charged in connection with Pct. 5 corporal's murder
How many times can I reuse my N95 mask?
Show More
Decades after TV anchor disappears, convicted rapist denies connection
Driver dies after slamming into 18-wheeler's trailer on US-59
Woman shot in the shoulder during robbery set up in SW Houston
Prepare for a major closure at I-69 and 610 West Loop this weekend
Officers escort body of corporal killed in ambush to funeral home
More TOP STORIES News