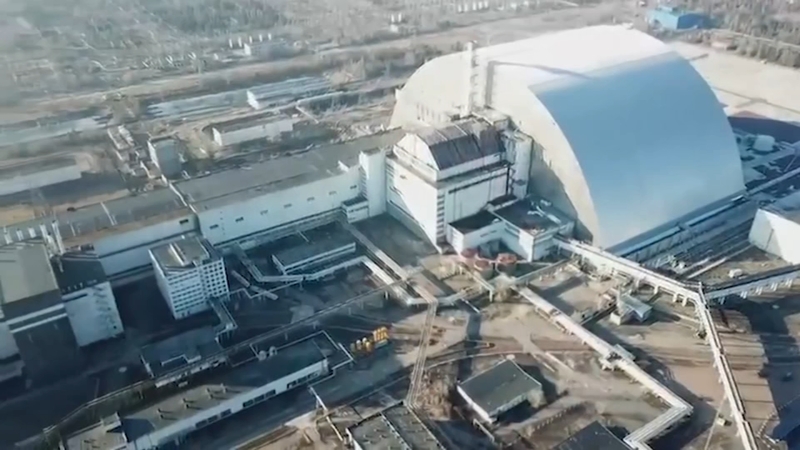 HOUSTON, Texas (KTRK) -- The Chernobyl nuclear disaster was nearly 36 years ago, but it is again in the news after reports surfaced Wednesday morning that Russian forces have cut power to the facility.

ABC13 Reporter Tom Abrahams visited Chernobyl ahead of the 20th anniversary of the nuclear disaster that killed and injured countless people across generations. At that time, he and his photographer were the first American television news crew to be allowed to visit in four years.

The meltdown and explosion happened during a system test in April 1986. At the time it was the most powerful nuclear plant in the Soviet Union. When we visited, the damaged reactor number four was housed in a failing shell called a sarcophagus. It has since been replaced but the site still requires power to keep cool all of the nuclear material still housed there.

On Wednesday, Tom spoke with Notre Dame civil engineer Jim Alleman, who worked on the international effort to build the new containment dome.

"Chernobyl is a very vulnerable place that has high risk in terms of radioactive release of the facility that was breached," Alleman said. "The spent fuel that was in that facility that's been pulled out, a lot of it is just lying on the ground inside the original failed reactor. But the spent fuel rods that they pulled out, they put those in a cooling system. Cooling is critical to keeping the temperature controlled."

We also spoke Wednesday with Tomoko Steen, from the Georgetown Medical School, who Congress called to lean on her expertise. Steen says that while there is a minimal threat from the power outage, the much bigger threat would be a dome breach or explosion.

"I think the main problem causing fear is the lack of knowledge," Steen said. "However, if the dome is destroyed and an explosion happens, then it's a problem because the explosion means radioactive material goes up and spreads. "

Chernobyl itself is not abandoned. The 19 miles surrounding the plant is called the exclusion zone. It is heavily guarded and is the workplace for hundreds of people.

Inside you'll find scientists, military and other government workers. There is also the abandoned town of Pripyat, the home to many of Chernobyl's workers and their families, and other homes buried under the ground because of irradiation.

Many of the personal stories are -- incredibly enough -- archived at the Texas Medical Center, where researchers have for decades studied the cross-section of medicine and low-dose radiation. For them, Chernobyl is still relevant, especially in light of what's happening now. We spoke with two archivists in charge of the catalog of material.

"Getting into the archive can be a way to make that connection and make something more accessible and understand a bit more about the lives of the people impacted," said Matthew Richardson, a McGovern Historical Center archivist.

"There is a lot to learn from these collections. They offer firsthand accounts of people trying to understand the long term impacts of these events," said Sandra Yates, also at the McGovern Historical Center.