After cancer battle, couple tries to win 'wedding of a lifetime' 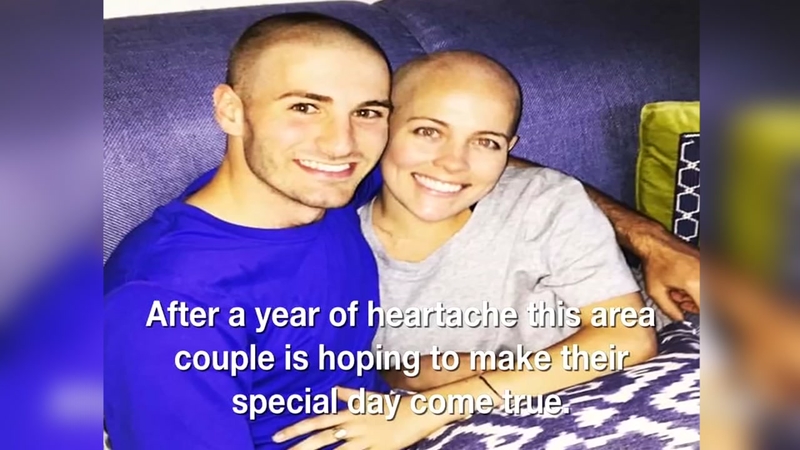 After cancer battle, Charlotte couple tries to win 'wedding of a lifetime'

CHARLOTTE, North Carolina -- Weddings are, for most couples, one of the happiest days of their lives. And one couple is hoping to make their special day come true after a year of heartache.

One lucky couple living in the Carolinas will be awarded an all-expenses-paid, 100-guest wedding at Kimpton Tryon Park in 2019.

And this couple is just one of three finalists, hoping to win.

One Charlotte couple is hoping to make their special day come true after a year of heartache.

The Greensboro natives, currently living in Charlotte, met as teens, fell in love, and dated through college when Stanton was at UNC and Mills attended UVA.

But their story isn't all bliss, they actually had a rather trying year.

In March 2017, Stanton was diagnosed with Hodgkin's Lymphoma.

Determined to beat it, she underwent 12 rounds of chemotherapy.

While the happy couple hoped for the best, they got some devastating news a few months later ... Stanton's cancer was back.

Her best shot at a cure was a stem cell transplant, which involved new chemotherapy treatments followed by a three-week stay in the isolation wing of the hospital.

Throughout her ups and downs, one thing remained the same ... Mills was always by her side - and on a pullout couch.

"Matthew has been my rock through it all," Stanton explained. "When I am having a bad day or am tired, I go to him and he gives me renewed strength. He has been a huge source of courage, happiness, and comfort for me through it all and I could never express how much all his support has meant to me."

And in December, Mills popped the question after nine years together.

Stanton completed the transplant in February; however, she still faces a year of maintenance treatments to remain in remission.

While their love has remained strong, the cost of medical expenses and treatments put a strain on the couple, which would make this win a gift they would always treasure.

The couple calls their wedding the "beacon of light at the end of the tunnel," adding that their bond is strong because they've already journeyed through the "for better or for worse" and "in sickness and in health" part of their future vows.

"This journey has strengthened me in ways, I can't really put into words," Stanton told ABC11. "You never expect to have to go through something like this, especially at 24, but with the help of my family and friends I got through it and am thankfully coming out on the other side. It is still a struggle every day to return to normalcy, but I am getting there and just feel so lucky to be in remission and moving on with my life. "

The hotel said they're searching for a couple that's overcome a significant challenge together.

Votes for these sweethearts can be made online.

"Matthew and I want to win because, at 24 and 25, the medical bills are daunting but a wedding on top of it is even more stressful. To lessen the financial burden so significantly would be amazing. We have also just been through so much this year and I feel that this would just be the perfect, happy ending to a difficult time."
Report a correction or typo
Related topics:
societynorth carolinabuzzworthyuncweddingcancercharlotte news
Copyright © 2021 WTVD-TV. All Rights Reserved.
BUZZWORTHY
Nearly 100 rattlesnakes found living under Calif. home
Bear spotted wrestling with display pumpkin
Wood products from upcycled sawdust
3D printing with calcium carbonate could restore coral reefs
TOP STORIES
Arrest made in case of Alvin abduction, sexual assault of a minor
20-year-old shot to death during break-in of Conroe home, police say
Man accused of dismembering mom's body after murder appears in court
Houston Astros on pace for record beer year
Astros Game 6 guide: Closures around Minute Maid Park back on tonight
Cleveland man indicted in connection with U.S. Capitol attack
The University of St. Thomas offers low-cost counseling services
Show More
JJ Watt on Texans: 'It hurts me to see where' fan base is now
More truck drivers needed to assist with US' supply chain shortage
Don't get stuck in these traffic closures this weekend
Warrant: Baldwin didn't know weapon contained live round
Prop guns: What they are and how they can kill
More TOP STORIES News