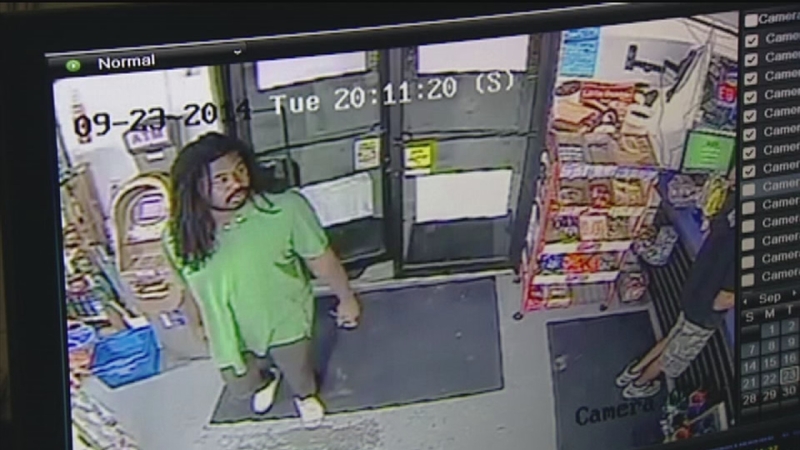 CRYSTAL BEACH, TX (KTRK) -- Police say they have captured the man charged in the disappearance of a University of Virginia student.

Charlottesville Police Chief Timothy Longo said Wednesday that Jesse Leroy Matthew Jr., 32, is in custody in Galveston, Texas. Matthew is charged with abduction with intent to defile in the case of 18-year-old Hannah Graham, who has been missing since Sept. 13.

Tap/Click here for the latest on the arrest.

A day before his capture, surveillance cameras inside Swede's Grocery on the Bolivar Peninsula caught Matthew buying mosquito repellent.

"I didn't think he would be here because Virginia and Crystal Beach, that's far away," store owner Dave Paresh said.

Paresh gave ABC-13 an exclusive look at surveillance video showing Matthew coming into the store twice. Paresh said he had no idea Matthew was a wanted man, and described him as friendly and talkative.

"He asked me the question if it's safe to stay on the beach, so I told him yeah it's good there," Paresh said. "He did buy some Off! from me and he walked outside and then came back again ... and got some water from me and then he just walked out."

According to the Galveston County Sheriff's Office, Matthew was located on the beach in Gilchrist on the Bolivar Peninsula at around 3:30pm. Matthew's stay in our area didn't last long, but folks in the usually quiet town won't forget his cameo.

"It's a small town. We only have 2 cops down here. Anything could've happened," store clerk Rychaun Greenwood said. "I know my regulars and I knew he was not a regular."