"I can replace the truck, just can't replace me and my brother," one teen said.
KTRK 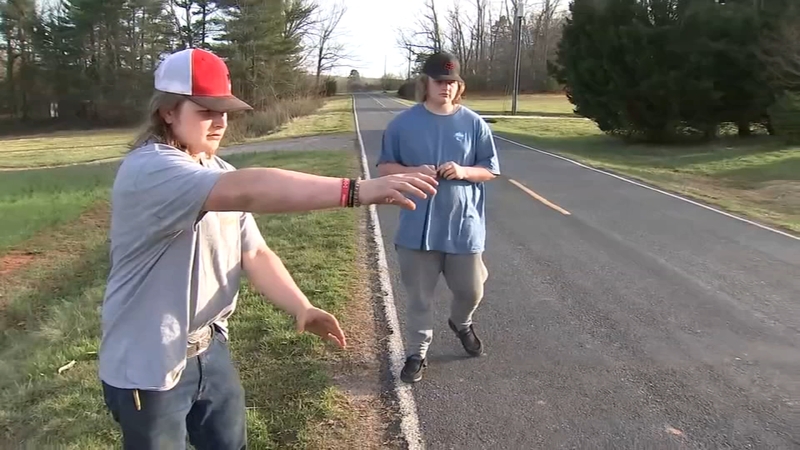 Will Hinson, 16, and his brother Devon, 15, were on their way to high school last Friday during an early foggy morning in Catawba County.

Will, who was driving, had just backed out of their driveway when his pickup truck ran out of gas.

"I was just like this can't be real. This can't be serious," Will told ABC station WSOC-TV.

They put on the broken-down pickup truck's flashers and decided to push it into a field across the street.

As the teens tried to move the truck off the road, they spotted another truck headed in their direction.

"We saw it and I started waving my hands in the air and tried to get him to slow down, and he just wasn't slowing down," Devon said.

The truck slammed right into their vehicle. The teens, who were outside the truck, were not hurt.

Police say inside the striking truck was another teen heading to school.

Their mother, Alicia Hinson, watched the crash unfold live on a home security camera. The video captured her running outside seconds later .

"My heart just dropped. I knew that my boys had been run over. So I took off running out of the house. And as a mom watching that live, it's something you don't want to see," Alicia said.

The teens saw that there were two people in the other pickup truck.

They grabbed a sledgehammer and used it to break the window, helping free the driver and passenger out of the truck. Their conditions have not been released.

The brothers said there was so much damage that both trucks were totaled.

Will Hinson, who's been driving for only six months, said that's not what matters.

"I can replace the truck, just can't replace me and my brother," said Hinson.