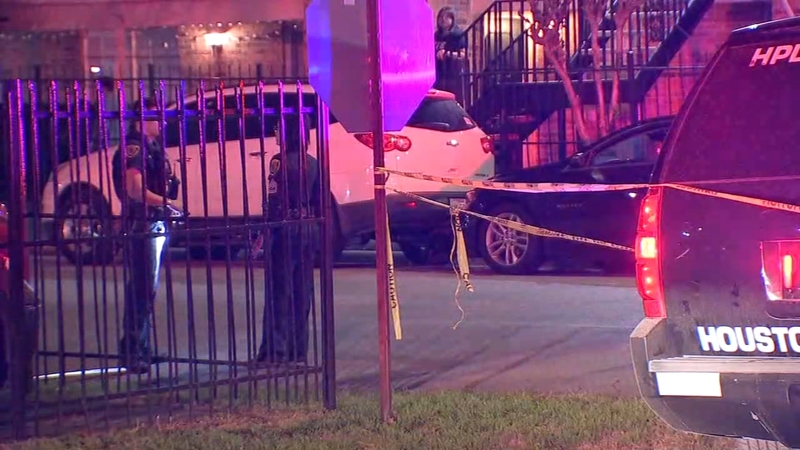 HOUSTON, Texas (KTRK) -- A suspected car burglar is dead after police said he was shot by people trying to stop him, then run over by a woman who may have been an accomplice in southwest Houston.

The shooting happened at an apartment complex on Clarewood near Chimney Rock around 11:30 p.m. Thursday.

ABC13 spoke to Ulysses, who says he is the brother of one of the men who was trying to stop the suspect from breaking into a car.

Ulysses pointed out the white truck that was being targeted in the parking lot. The driver's side window was busted out.

The suspect didn't know that Ulysses' brother was sitting in his car across the street, watching what was happening.

Witnesses said the truck belonged to their neighbor, which is why they were trying to protect it.

Ulysses said he was asleep at the time, but two of his brothers went outside to see what was happening. According to Houston police, one of the men had a gun.

A confrontation with the suspect and the three brothers got heated, and shots were fired, police said.

The suspect was hit, and then he tried to run off down the street.

Investigators said a light blue Nissan Rogue may have been the getaway car. A woman was inside the car with a small child, police said.

Shots were fired as the suspect was running toward the car. Police said that may have scared the woman because she reportedly ran the suspect over as she drove off.

At that point, Ulysses said he heard screaming and came outside.

"So my brother calls, and he's like, 'What are you doing?' And then he calls my other brothers for backup, so that's when everything else happened," Ulysses said. "And I hear my brothers, and I see that it's my brothers, so they are telling me, 'Call 911. Call 911. He just got ran over.' And I'm like, 'Who?'"

The suspect was taken to the hospital, where he was later pronounced dead, police said.

HPD homicide investigators were still working to piece together exactly what happened and are trying to locate the woman driving the Nissan Rogue.