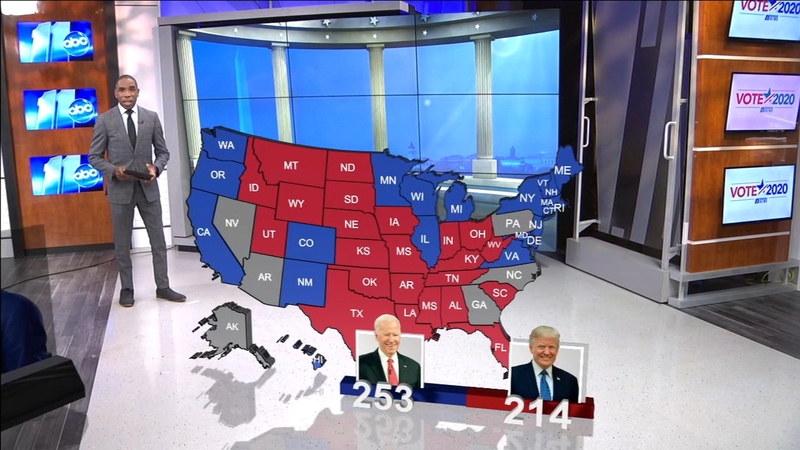 The race for president: The latest update on the electoral map

The 2020 presidential election is still too close to call Wednesday and political nerds are crunching the numbers, trying to figure out who will reach 270 electoral college votes first and win the presidency.

As of 1:30 p.m. PT, both President Donald Trump and former Vice President Joe Biden have paths to victory, depending on how the remaining battleground states are called.

ABC News called Michigan just after 1:30 p.m. as a victory for Biden. The vote in Wisconsin is also very close and hasn't yet been certified, but ABC News is reporting Biden as the apparent winner.

With Biden winning Michigan Wednesday after, per ABC News projections, and the likely winner in Wisconsin, he's at 253 electoral votes. He needs to reach 270 to win, and he has a few ways to get there.

If Biden wins Pennsylvania, which has 20 electoral votes, then he's over the top then and there. But President Trump is leading in Pennsylvania, so that's far from a sure bet for Biden.

He could also make up the missing 17 electoral votes with a combination of any two other outstanding states, like Arizona and Nevada (where he's leading), or one of those plus North Carolina (15 electoral votes), or Georgia (16 electoral votes).

As of 1:45 p.m. PT, Trump has a lead in Georgia, North Carolina and also Pennsylvania. Still, winning all of those puts him just shy of 270, so he'd need to win one more key undecided state to secure reelection, like Arizona or Nevada. That means Trump would need to win nearly all of the still undecided states to clinch the presidency.

The most outstanding votes that still need to be counted, as of Wednesday afternoon, are in Pennsylvania.