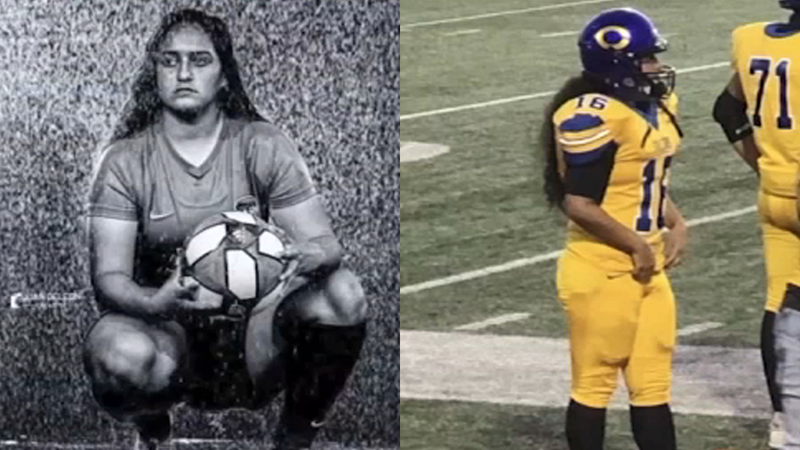 HOUSTON, Texas (KTRK) -- It's like a plot from a movie script.

A young female soccer player gets asked to help her school's football team and contributes to big wins. Except, this isn't Hollywood, this is real life.

Cambree Catalano of Channelview is a great student and was on her school's homecoming court.

Beyond that, she is a star soccer player and now a kicker for the playoff-bound Channelview High School football team.

The journey to the team came after some encouragement from her now teammates.

"They were like, 'You could do that too. You can go out and kick, and we need another kicker,'" recalled Catalano. "I think I can kick that far, so I tried it."

Channelview head coach Averion Hurts saw the potential and gave her a chance.

"She got better and better as she got the feel of it," he said. "She would have to leave and I would drive her on the gator to soccer practice."

The transition happened fast. Catalano had to learn how to put the pads on and even kick the football.

"I was playing soccer for club, [and] at the same time I was trying to learn football. I wasn't trying to change too much because I am trying to play soccer in college," she said.

Soon after, success followed. Catalano became the team's onside kicker, but after an injury to the starter, she was thrusted into that starting role.

Vanderbilt University's Sarah Fuller made college football history last month when she became the first woman to play in the Power 5 Conference with a kickoff against the University of Missouri.

Could Catalano be the next one?

"I don't know about football in college," she said. "But, maybe."