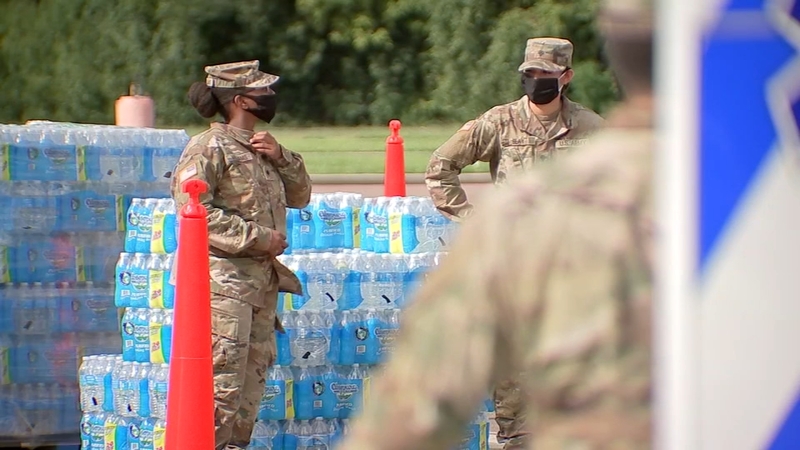 National Guard distributes bottled water to those in Brazoria Co.

LAKE JACKSON, Texas (KTRK) -- The city of Lake Jackson has lifted a Do-Not-Use Advisory for water customers while a Boil Order remains in place.

The change comes as state and city officials worked to flush and disinfect the city's system after tests revealed the possible presence of a brain-eating amoeba in three water samples.

The earlier advisory urged residents not to use water for cooking, bathing or drinking. The updated guidance lifted those restrictions and was part of a planned transition to bring the water system back to normal, TCEQ officials said.

Lake Jackson officials also said the city began a free chlorine conversion late Saturday night that is expected to last 60 days. The system is reportedly required to undergo a full flush, which may cause the water to taste or smell different. The city urges residents to limit water usage for about the next two months.

Members of the Texas National Guard are in the area helping local first responders by distributing water. Each car gets one free case of bottled water between 8 a.m. and 7 p.m. at the Brazosport College.

Soldiers with the National Guard are at the water distribution at Brazosport College, helping Lake Jackson crews get residents the bottled water they need. We’re live at 5:30pm with the state’s response @abc13houston pic.twitter.com/v9ttMb6GVM

On Tuesday, September 29, the water distribution will change locations to the Lake Jackson REC Center on Lake Rd, due to the college campus resuming classes.

Naegleria fowleri typically affects people when the contaminated water enters their body through their nose, according to the CDC.

It can travel to the brain and cause a condition known as amebic meningoencephalitis, a rare but highly lethal disease, according to health experts.

Symptoms of the illness include headaches, vomiting, fever and becoming disoriented.

The other two positive tests were in samples taken from the civic center fountain and a fire hydrant, according to Mundo.

The attraction was closed as a precaution on Sept. 8 after city officials were notified of his death.

WATCH: Mom of 6-year-old amoeba victim talks about his love of baseball, his sister and the outdoors
EMBED More News Videos

While the initial advisory targeted the Brazosport Water Authority's supply, no other cities have reported any issues, BWA board president Juan Longoria told The Facts.

WATCH: Residents react to the news as they stock up on bottle water at grocery stores
EMBED More News Videos

Lines formed at grocery stores as people flocked to buy bottled water after news spread about an advisory not to drink water in Lake Jackson.

Lake Jackson draws half its water from wells and the other half from the Brazosport Water Authority, according to Mundo.

As word spread about the earlier Do-Not-Use Advisory, people flocked to supermarkets to buy bottled water. Some customers were seen leaving stores with carts full of large quantities of bottled water.

At an emergency meeting of the Lake Jackson City Council Saturday morning, city leaders discussed the massive response that includes state resources and the CDC. Deliveries of bottled water were being coordinated by the Texas Division of Emergency Management, Mundo said.

The Texas Dept. of Criminal Justice sent water tanker trucks to both prison facilities impacted to provide water for showers at two prison facilities. 18-wheelers loaded with pallets of bottled water were also ordered for the units.