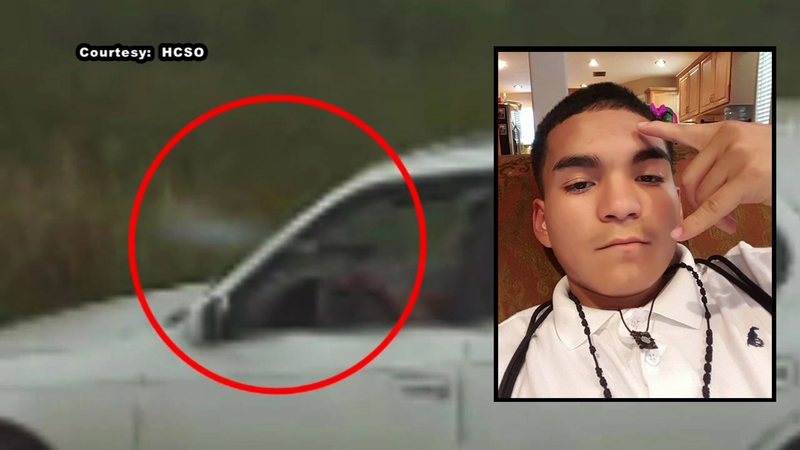 HOUSTON, Texas (KTRK) -- The Harris County Sheriff's Office has released video of the Halloween deputy-involved shooting that killed a teenager.

Authorities say a deputy tried to pull Centeno over after he failed to stop for a school bus that was unloading students in the 7600 block of Spring Cypress Road.

Instead, as captured on dashcam video, Centeno took off. After a brief pursuit, his vehicle became stuck in a ditch in the 14800 block of Stuebner Airline Road.

In the video, you can see deputies approach his vehicle on foot with guns drawn, talking to him. Centeno allegedly disregarded deputies' verbal commands, then raised a handgun and fired it in the deputies' direction from the driver's seat.

In a secondary dashcam video, the teen can be seen raising the gun towards deputies, which turned out to be an air gun that fired pellets. He is seen on video firing off one shot.

"You can clearly hear in the video, they asked him to show his hands and that's when he produces the gun," said Harris County Sheriff Assistant Chief Tim Navarre. "Once the suspect produced the weapon, he pointed it at the deputies, fired one time, the deputies shot back, and killed the young man."

"It's hard for me. It's hard," said Jose Centeno Sr., who spoke to us outside his home on Monday. "I don't know how to explain that."

A bullet-riddled car shows the aftermath of an office-involved shooting involving a 17-year-old driver in northwest Harris County.

Centeno Sr. says he was the oldest of his seven kids. He said his son was not troubled, and he had no idea where he got the air gun.

In his front yard, he still has the older model Lexus his son was driving that night. It is riddled with bullets.

"I guess he was scared," the father said about his son. "I'm really in shock."

The incident remains under investigation by the Harris County Sheriff's Office Homicide Unit and Internal Affairs.