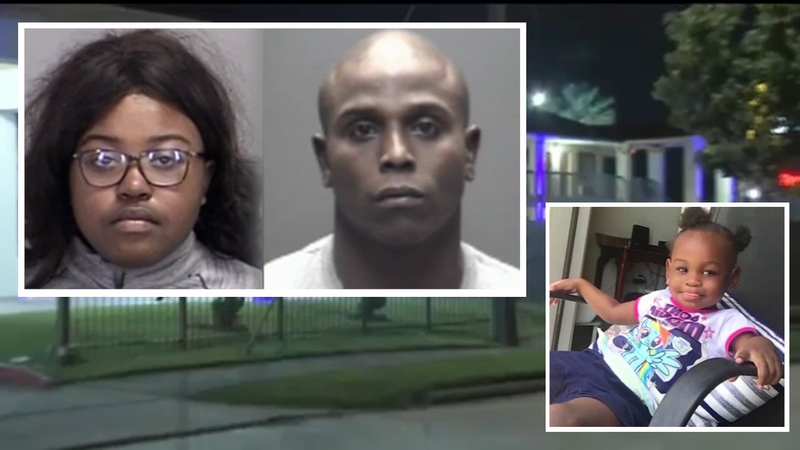 Her mother, Tiaundra Christon, and her mother's boyfriend, Kenny Hewett, were each arrested.

Court records report they took turns beating the girl inside a southeast Houston hotel room because she wouldn't stop crying.

"Hewett was violently hitting the child with a belt, causing whelps to her legs, arms and face," records state.

Documents say the toddler died that night and was placed inside a plastic bag.

In an interview with investigators, Christon told them her boyfriend "assisted her by wrapping the bag and corpse in a rope and attaching a heavy rock."

The little girl's body was recovered in a Texas City pond days later. The couple was arrested and charged with a single felony in Galveston County: tampering with evidence with intent to impair human corpse.

Now, more than a year later, neither is charged with murder.

ABC13 spoke with the little girl's father, Tobodrick Anderson, who said he worries the murder charge will never come.

"I spoke briefly with the district attorney and it didn't make a whole lot of sense to me, but the autopsy report couldn't really show cause of death. So, for that reason, that's why the murder charges weren't pursued," said Anderson.

Hewett pleaded guilty to the tampering charge and was sentenced to 20 years in prison. But Anderson wants to see both suspects charged with murder.

"It really doesn't sit well with me that that happened to my daughter and that they still get a chance at life, you know what I mean?" he said.

We tried to get answers from the Galveston County District Attorney's office, but it told us it cannot talk about the case because Christon's trial is still pending. The trial is set for early 2020.

Meanwhile,the Harris County District Attorney's office said no law enforcement agency has presented its prosecutors with a case for possible charges, even though the mother claims her daughter died in a Houston hotel room.