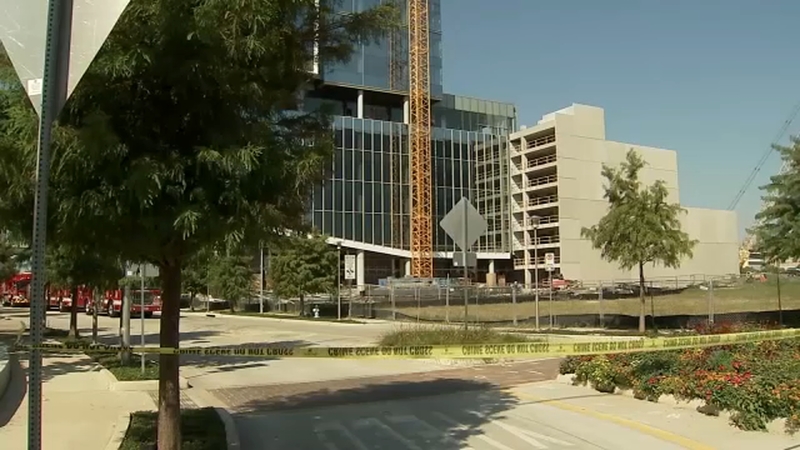 A partial collapse happened two days earlier in the area of Town & Country Boulevard near the I-10 Katy Freeway.

On Wednesday, the Houston Fire Department said it took two-and-a-half hours to recover the victims. The day before, the building under construction was too unstable for crews, prompting them to create a plan for today.

Twenty rescue technicians are at the scene, along with a hazmat team, cutting through a three-story high rubble pile.

Authorities have not yet identified the victims.

With a building under construction still too unstable for recovery crews, HFD said the bodies of three workers are still encased at the work site a day after a partial collapse. In the video, the best friend of one of the workers saw up close where his friend lost his life.

After the accident, ABC13 spoke to a man, who came to the accident site to see if he could learn more about his friend, who is identified as a welder on site. "[He was like] my brother. I knew him for a long time, like 18 years."

Assistant Fire Chief Ruy Lozano said at the time of the collapse that one other person was rescued and taken to the hospital. The collapse appeared to involve newly constructed stairs, starting at the 13th or 14th floor of the 15-story building.

A heavy tarp covered the working area, shielding the recovery effort from the public eye.

Besides the three killed and one injured, around 240 construction workers who were on the site at the time of the collapse were not injured.

The workers' deaths add to the grim statistic of construction-related deaths around Texas every year.

According to federal records, in 2019, 25 workers died in construction-related accidents in Houston. Across Texas, 174 workers died that year.

So far in 2020, at least 40 Texas workers have been killed, including nine deaths in Houston.
The building under construction is for the Houston-based Marathon Oil new headquarters, according to the company's website.

A company spokesperson released the following statement regarding the incident:

ABC13 also learned that Harvey Builders were hired to take on the project with subcontractor East Texas Precast and development manager Hines.

A spokesperson from Harvey Builders released the following statement:

"Harvey Builders is working with the Houston Fire Department, our subcontractor East Texas Precast, and Hines, the project's development manager, to investigate a fatal accident involving the collapse of a stairway on the construction site of the future Houston headquarters of Marathon Oil. Construction is an inherently dangerous activity and in recognition of this Harvey and its subcontractors observe very strict protocols on every project. Our thoughts and deepest sympathies are with each of the families involved during this difficult time."