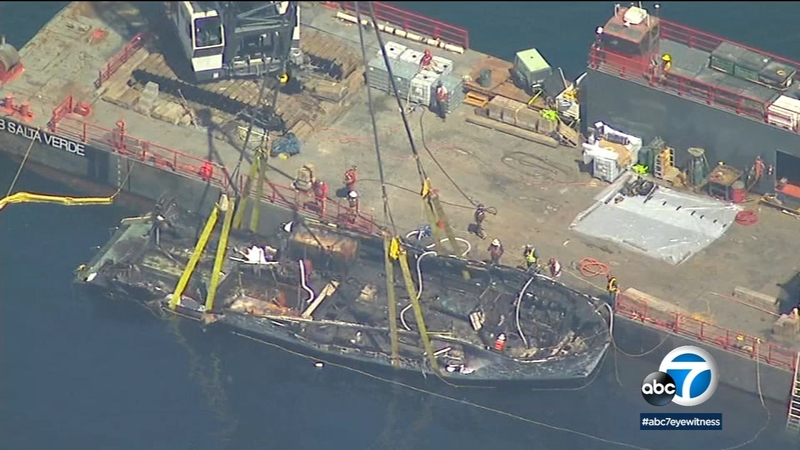 SANTA BARBARA, Calif. -- All six crew members were asleep aboard a scuba diving boat off the Ventura County coast when a fire broke out in the middle of the night, killing 34 people who were trapped in a bunkroom below the main deck, federal investigators announced Thursday.

Boats like the 75-foot Conception, which caught fire around 3 a.m. on Sept. 2 and sank, are required to have a crew member keep watch at night.

According to a preliminary report released by the National Transportation Safety Board, interviews with three crew members indicated that no mechanical or electrical issues were reported before the disaster.

"Efforts continue to determine the cause of the fire," the report said.

The NTSB is conducting its investigation amid an ongoing criminal probe by the FBI, Coast Guard and the U.S. Attorney's Office. Meanwhile, at the scene off Santa Cruz Island, a salvage crew on Thursday used a crane to retrieve the boat's wreckage from the bottom of the sea.

At an afternoon news conference, Santa Barbara County Sheriff Bill Brown said the boat was being prepared to be lifted onto a barge. It will then be transferred to an "undisclosed, secure location for further investigation," Brown said.

The two-page report said five crew members were asleep in their quarters behind the Conception's wheelhouse on the second deck when the flames erupted. Another was sleeping below deck.

RELATED: Santa Barbara boat fire: Owner says crew 'had no choice but to evacuate the boat'

One of them "was awakened by a noise and got up to investigate," the NTSB said. "He saw a fire at the aft end of the sun deck, rising up from the salon compartment below."

He awakened his crewmates and the captain radioed a distress call to the Coast Guard.

An attorney for the boat's owner contradicted that finding, saying in a statement that a crewmember "checked on and around the galley area" around 2:30 a.m. Just 30 minutes later, the boat was ablaze.

Thirty-three passengers and one crew member died of smoke inhalation as they were trapped below a raging fire.

"Yesterday we were able to locate the final missing victim and no one has been left behind," Brown said at the news conference, adding that all 34 of the deceased have been successfully identified.

The sheriff then read the names of the five victims whose identities had not previously been released.

"May they all rest in peace," he said, "and may their families know that all of us who have been involved in this sad operation continue to hold them in our hearts and in our prayers."

A Coast Guard bulletin released Tuesday included new safety recommendations in the tragedy's aftermath, including the limitation of unsupervised charging of lithium-ion batteries and the use of power strips and extension cords.

Boaters are also encouraged to review emergency duties, identify emergency escapes, check all firefighting and lifesaving equipment onboard, and examine the condition of passenger berths for "unsafe practices or other hazardous arrangements.

According to Coast Guard records, the Conception passed its two most recent inspections without any safety violations.