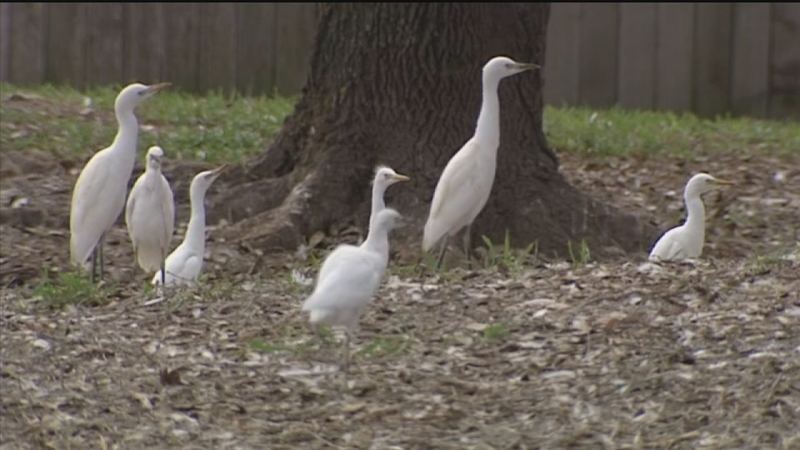 HOUSTON (KTRK) -- It is Labor Day, but in a neighborhood park in Middlegate Village Park, the picnic tables are empty. The playground is quiet. That's not to say there isn't activity.

The "visitors" are cattle egrets -- snowy white birds often seen in livestock pastures, riding atop the backs of cattle. The small park has developed over the years into their spring and summer home before they migrate south for the winter. From its small beginnings, that gathering has matured into a large colony that spans more than a dozen trees.

At its peak, it's said that hundreds of birds roost in the park that is less than two acres.

Brad Lapp lives two houses away from the park. As much as the bird chatter, his complaint is about the smell, which can only be compared to the odor of an uncleaned bird cage.

Then there is the playground section of the park, which now has a sign reading "park closed due to bird activity."

"It's a health hazard," Lapp believes. "The droppings are around and in the (community) pool in the morning. All they do is wash it off with a hose."

Lapp, and indeed some of his neighbors, want the birds gone. The solution isn't simple.

Cattle Egrets are protected by the Migratory Bird Act, which is enforced by US Fish and Wildlife Service. It is, in effect, a federal crime to tamper with active nests, or harm the birds. Nests can be removed after the nesting season, when the birds migrate.

Homeowners versus cattle egrets is not a new battle. The TWRC Wildlife Center in west Houston gets at least one complaint a year on how to address the birds. Any removal action must be done with a federal permit.

One of the options could be to remove the trees in which the egrets roost, an option Brad Lapp questions because parks imply trees.

The egrets will move on when the weather turns cooler. In the meantime, the egrets are the only ones on the playground.
Related topics:
houstonanimal news
Copyright © 2022 KTRK-TV. All Rights Reserved.
TOP STORIES
HCSO sergeant hit and killed by driver during escort, sheriff says
2 adults killed and 12-year-old hurt in crash with speeding tow truck
Suspect accused of killing Pct. 5 corporal still on the run
Grab the umbrella! Widespread showers move in Monday
Inside Texas hospital battling omicron: 'We're about to catch on fire'
Tax filing season starts Monday. What to expect for 2022
5 tax changes that can boost your refund this year
Show More
COVID-19 patient at center of ventilator fight dies in Texas
3-year-old drowns in pool in NW Harris County, sheriff says
Woman found in a ditch after a hit-and-run
Little York firefighters work to put out fire at N. Houston apartment
Former Houston Oiler takes over Prairie View A&M football
More TOP STORIES News