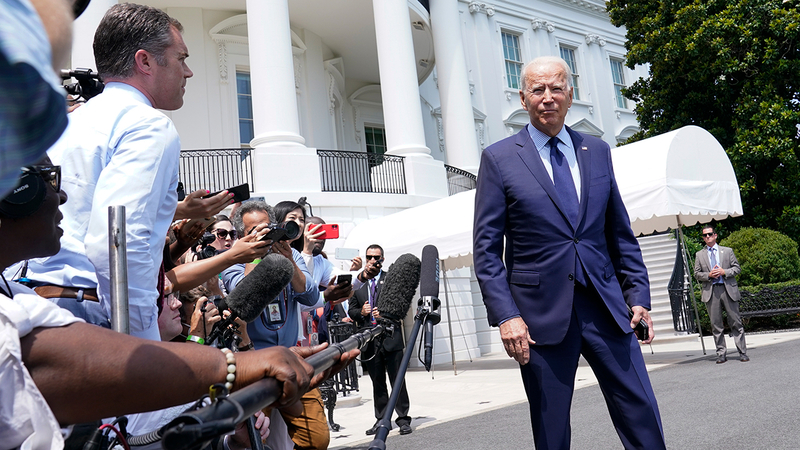 WASHINGTON -- A commitment to American labor helped fuel President Joe Biden's bid for the White House as he promised to be "the most pro-union president you've ever seen." It was an embrace that many of the major federations, associations, teamsters and brotherhoods in the nation requited by endorsing his candidacy.

But the support for Biden's leadership that united more than 50 union groups during the campaign threatened to splinter publicly this week, over mixed reception of his plan to require federal workers get the COVID-19 vaccine or face regular testing and other restrictions.

Even before Biden's announcement, segments of the federal workforce rumbled with dissension. Some groups representing large numbers of workers raised preemptive objections.

"It is not the role of the federal government to mandate vaccinations for the employees we represent," the American Postal Workers Union (APWU) said in a statement the day before Biden made his announcement, adding that they encourage members to "voluntarily get vaccinated."

Following the announcement, an APWU spokesperson underscored that while their workers are government employees, they are an independent agency -- and thus don't have to adhere to Biden's new policy.

A White House spokesperson said that employees of independent agencies are not required to be vaccinated, but are strongly encouraged to do so.

"Make no mistake, we support being vaccinated as the most effective path and means to eliminate the COVID-19 virus, but not at the cost of our Constitutional rights that we protect and hold as self-evident," Larry Cosme, president of the Federal Law Enforcement Officers Association (FLEOA) said.

Biden's new policy is not a mandate but a choice: Either get vaccinated, or face potentially inconvenient restrictions. Federal government employees and contractors onsite will be asked to "attest to their vaccination status" by showing proof. Those who decline to be fully vaccinated, or decline to show proof that they are, must wear a mask at work, social distance and get tested for the virus once or twice a week; they may also face restrictions on official travel.

It all comes as Biden contends with flagging vaccination rates and the delta variant's exponential spread -- both of which threaten hard-fought wins in the fight against COVID.

After the new vaccine policy had been spelled out Thursday, major union groups reacted with a largely tepid response, with many members voicing concerns about personal freedoms, privacy and the policy's practice.

"We have a lot of questions about how this policy will be implemented and how employee rights and privacy will be protected," National Treasury Employees Union (NTEU) National President Tony Reardon said in a statement to ABC News. "This approach appears to establish a process for employees to voluntarily disclose their vaccination status."

NTEU represents 150,000 federal employees across 34 departments and agencies. For those employees who wish to keep their vaccination status confidential or choose to remain unvaccinated, Reardon said, "a testing protocol will be established."

The largest union representing federal employees, the American Federation of Government Employees (AFGE), said they expected any new policies to be "properly negotiated with our bargaining units prior to implementation."

"We are seeking details on many aspects of this plan," NTEU's Reardon said. "We will work to ensure employees are treated fairly and this protocol does not create an undue burden on them."

NTEU endorsed Biden's candidacy during the 2020 election, as did AFGE and APWU.

So did National Nurses United (NNU), the largest union and professional association of registered nurses in U.S. history. They represent more than 170,000 members nationwide, including some VA nurses, and while saying vaccination is "critically important," they said they place the greatest emphasis on the importance of "respecting the need for medical and religious accommodations."

"The Biden administration is trying to thread that needle," NNU President Deborah Burger told ABC News. "You have to honor those accommodations, and move forward."

At least one major federation of unions is going ever further than Biden in its stance on vaccines: AFL-CIO President Richard Trumka said Tuesday that he would support a full vaccine mandate.

"It's important, if you are coming back into the workplace, you have to know what's around you. If you come back in and you are not vaccinated, everybody in that workplace is jeopardized," Trumka told C-SPAN. "What we need to do now is to get more people vaccinated, and I think the mandate is a very acceptable way to do that."

The AFL-CIO endorsed Biden during his candidacy, as did one of its largest member unions, the American Federation of Teachers (AFT) -- but this week, the two diverged on the matter of mandates: AFT President Randi Weingarten said that vaccine protocol should be arbitrated in the workplace itself.

"In order for everyone to feel safe and welcome in their workplaces, vaccinations must be negotiated between employers and workers, not coerced," Weingarten said in a statement ahead of Biden's announcement, cautioning that a get-the-shot-or-get-fired protocol would risk losing health care staff at a time when they're most needed, and when "staffing levels are already low from the trauma of the past year."

On Thursday, Biden pleaded for Americans to appreciate how urgent the situation has become.

"It's literally about life and death," Biden said in announcing the policy. "That's what it's about. You know and I know, people talk about freedom. But I learned growing up, from school and my parents: With freedom comes responsibility."