Help or 'get out of the way,' Biden says to Republican governors on combatting COVID pandemic 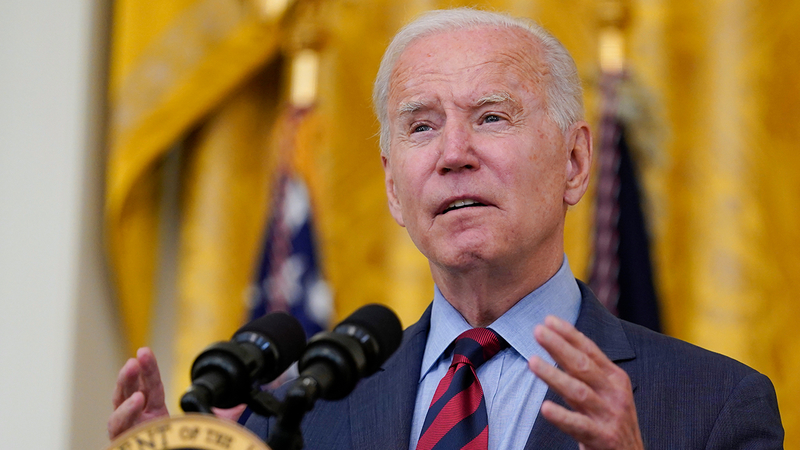 WASHINGTON -- President Joe Biden took aim Tuesday at local officials, including the Republican governors of Florida and Texas, over measures that prevented public health measures in the wake of surging COVID-19 cases.

"I say to these governors: please help, but you aren't going to help at least get out of the way," Biden said. "The people are trying to do the right thing. Use your power to save lives."

"And worst of all, some state officials are passing laws or signing orders that forbid people from doing the right thing. As of now, seven states not only banned mask mandates, but also banned them in their school districts, even for young children who cannot get vaccinated," Biden said.

Abbott issued an executive order on Thursday that banned mask mandates and other operating mandates in Texas.

"They have the individual right and responsibility to decide for themselves and their children whether they will wear masks, open their businesses, and engage in leisure activities," Abbott said in a statement about the order Thursday. "Vaccines, which remain in abundant supply, are the most effective defense against the virus, and they will always remain voluntary -- never forced -- in the State of Texas."

DeSantis has stuck to a long-time promise not to impose a mask mandate in Florida. Both states have also moved to ban institutions from requiring vaccinations.

In response to a question from a reporter, Biden criticized the measures as "bad" policy. This comes as the two states see surges in cases and hospitalizations.

"I believe the results of their decisions are not good for their constituents," Biden said. "And it's clear to me, and to most medical experts, that the decisions being made, like not allowing mask mandates in school and the like, are bad health policy."

"In fact, the most extreme of these measures is in Texas where ... a professor or teacher can be fined if they ask a student if they are vaccinated or if they ask unvaccinated students to wear masks. And I think the fundamental question we have is: What are we doing here?"

Psaki noted the need for unity in the fight against the virus, and even praised most Republican governments who she said are "doing exactly the right thing ... and taking steps to advocate for more people to get vaccinated."

Psaki also highlighted that the White House has extended offers of federal support to the two hard-hit states.

"Teams from (the Centers for Disease Control and Prevention) and (Health and Human Services) are in contact with Florida officials to offer technical assistance and support," Psaki said. "We're also engaged with the governor's office in Texas and the state health department to discuss the state of the pandemic there and how we can offer specific assistance, as well as Louisiana."

Asked by a reporter whether the states had accepted the federal support, Psaki said that it is a "discussion," and said that they are talking to the states about how the government "can provide additional assistance."