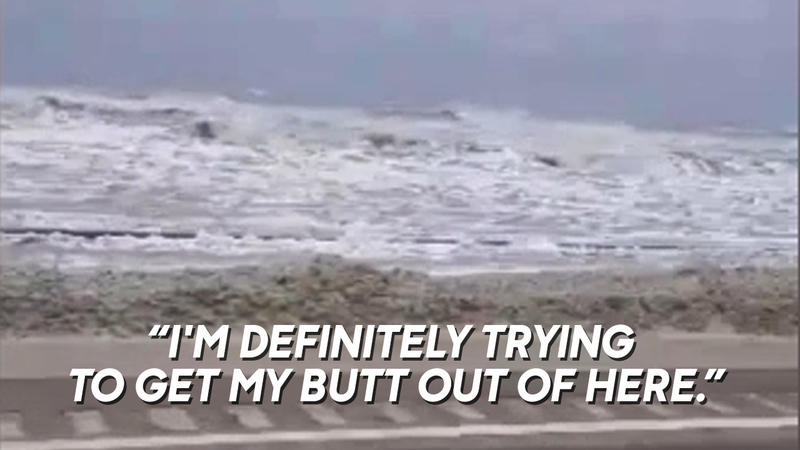 GALVESTON, Texas (KTRK) -- A man in Galveston decided he wanted to get out of harm's way ahead of Tropical Storm Beta and chose to make a last-minute escape through the Bolivar Peninsula on Sunday afternoon.

The roads, however, were not easy to maneuver and it didn't take him long to realize it was a mistake.

"So we tried to go across the [Galveston Ferry] and the ferry is closed, so we had to turn back around and go right back through this mess and it's 10 times worse," said Charles Chapman, who documented the entire ride on video. "There's debris everywhere."

The video shows a rough drive and debris scattered throughout the roads. The father was with his daughter and their dog Bella.

He came onto the Bolivar Peninsula from the Chambers County side and was met with strong, crashing waves coming over SH 87.

He said he continued to drive to catch the ferry but was unaware that the ferry shut down due to weather Saturday night.

Chapman said the waves were pushing his van all over the road.

"It's literally pushing my van," narrated Chapman. "This is very, very bad considering the storm hasn't even hit yet. I'm definitely trying to get my butt out of here and back up to I-10 and just get my butt home."

Fortunately, Chapman and his family made it safely home.