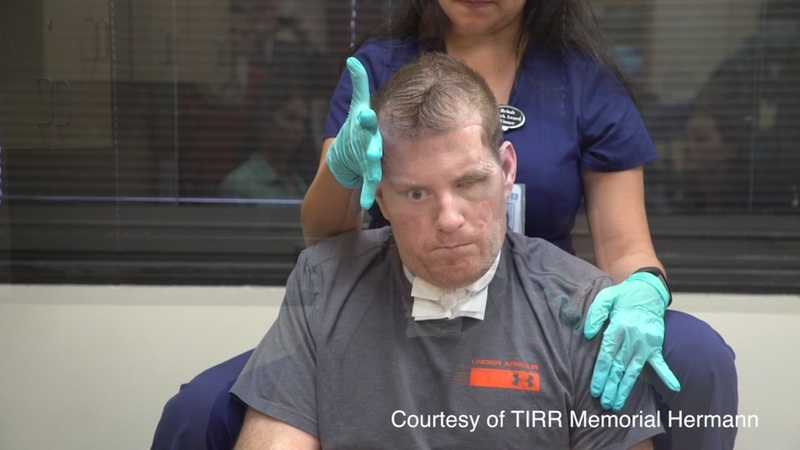 When he was shot on July 17 during the Baton Rouge ambush shooting, bullet and bone fragments damaged the left side of his brain.

Tullier wasn't expected to survive the first 24 hours after the shooting, but TIRR Memorial Hermann doctors say thanks to the medical care in Baton Rouge, he hung on.

In a news conference Thursday, a panel of medical professionals said Tullier is aware of what's around him, he can see, he knows he's in a hospital in Houston and he knows his family is by his side. However, he cannot speak. Doctors say his mind and body aren't always in sync. He still faces a lot of challenges, including suffering from paralysis of the limbs. While his mind may want to move, his body cannot.

Tullier is currently receiving physical therapy treatment at the hospital and his family says he knows he is in Texas.

Father of Baton Rouge injured deputy, talks about his son's recovery at TIRR

Keep checking back on this page to get real-time updates as this story unfolds. To get alerts for breaking news, download the ABC13 news app for iPhone or Android. You can also get breaking news alerts sent to you by email.
Related topics:
houstonbaton rouge police shooting
Copyright © 2022 KTRK-TV. All Rights Reserved.
TOP STORIES
Deputy constable shot and killed in southwest Houston
Grab the umbrella! Widespread showers move in Monday
Inside Texas hospital battling omicron: 'We're about to catch on fire'
Tax filing season starts Monday. What to expect for 2022
5 tax changes that can boost your refund this year
COVID-19 patient at center of ventilator fight dies in Texas
3-year-old drowns in pool in NW Harris County, sheriff says
Show More
Woman found in a ditch after a hit-and-run
Little York firefighters work to put out fire at N. Houston apartment
Man uses 2nd chance at life to open gym for young athletes
Former Houston Oiler takes over Prairie View A&M football
Family demands justice after 23-year-old woman found dead after date
More TOP STORIES News