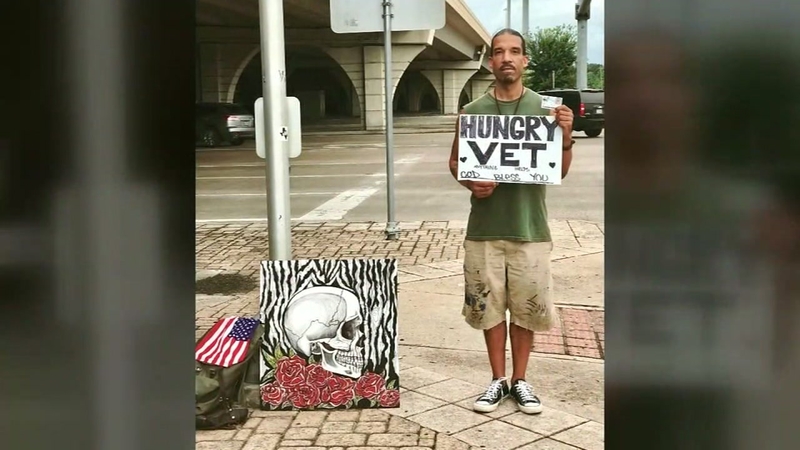 HOUSTON, Texas (KTRK) -- As cars travel over a creek on a Katy Freeway service road, yards beneath out of view, a homeless vet applies paint to plywood, creating art.

It is where Baird Asher has lived for two months after he caught a ride to Houston from New Orleans, where he was a street artist. As an Air Force veteran who was an aircraft mechanic, "I can put an engine together," he said, but his real calling is his art.

"I'm an artist, and this is what I do," he said. "I don't necessarily refuse to do anything else, but this is what God gave me the talent to do."

"I live under a highway bridge," he said with a laugh. But he needed the kindness of strangers to eat.

Two days ago, he was standing at an intersection with a sign that read, "Hungry Vet." That caught the eye of Suzanne Coppola, who was stopped at the light. At his feet was one of his paintings. It got Coppola's attention.

"I parked illegally and talked to him," she said. "He had an amazing story, and he's an amazing artist and I put it on my Facebook page, asking the creative community if we could do something for him."

"I have artists contacting me about ideas they have for him, and a gallery owner from Dallas, who also has a gallery in Miami, asked to buy all his paintings," she said.

Coppola returned the next day and found Asher in his Creekside camp, sealing the deal for his work, which also includes rock paintings. As a result of her social media post, a veteran is working to find Asher more traditional apartment housing.

"It was not only his art, but the fact no veteran should be hungry," Coppola said.

Asher is amazed that his life has taken a dramatic turn. The recurring themes in his paintings are roses and skulls.

"The skull to me symbolizes the bond between all of us," he said. "And, for me, it symbolizes choice. Sometimes the choices are good, and sometimes not."