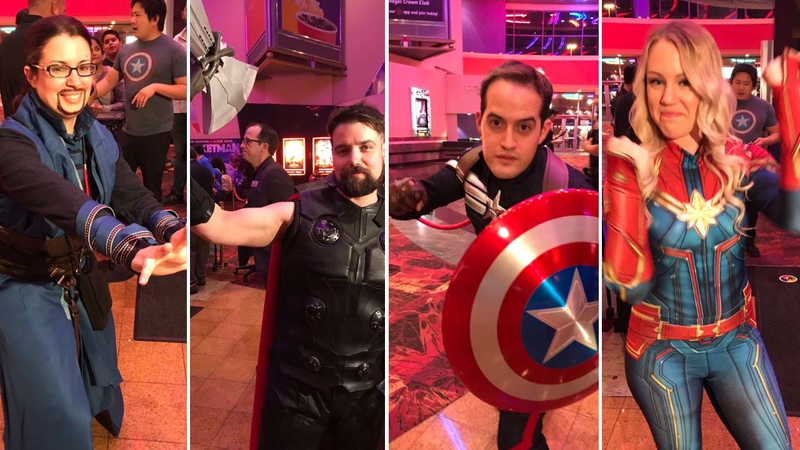 HOUSTON, Texas (KTRK) -- It may be the biggest opening night for a movie - ever.

"Avengers: Endgame" hit theaters overnight and it has already brought in hundreds of millions of dollars.

But for fans in Houston, making sure you're in theater seats on opening night isn't just about bragging rights. It's about sharing the experience with family and friends.

ABC13 reporter Jeff Ehling has the heart of Captain America, so we are all safe from spoilers after he saw the movie with about 130 people Thursday night.

End Game brings out the Hero in all of us! pic.twitter.com/7B26A4d5Ic

Today everyone is an Avenger! pic.twitter.com/JXR9SWVmcU

The fans told him they share a love of superheroes, and they wanted to share some laughs and be with friends. The outing turned out better than the organizers imagined.

"We've done this before, and it wasn't as big, but yes, absolutely, you know you tell a friend and a friend tells a friend," said Avengers fan Sarah Gutierrez.

The group started small a few years ago, but like the Marvel Universe, it just kept growing.

Now everyone gets a T-shirt and a ticket. While this chapter comes to a close with "Avengers: Endgame," some expect the party to continue.

"It is the end, but I kind of don't think that it is going to be the end, because they always bring something back," said Avengers fan Eric Ervin.

Sure, seeing the movie is great and all, but don't these people have jobs?

"I am an architect," Avengers fan Sonia Olivares told ABC13.

Olivares said she's not worried about missing work because she has it all taken care of.

"I have it on vacation, so I have the day off!" she said.

Jeff asked another costumed fan about whether he'll have to be up bright and early to head to the job.

But he said he's squared away too as a full-time student.

Sold out! This was the scene at the MarqE cinema as End Game hit the theater pic.twitter.com/6aLJj0rS3v

The movie is expected to topple box office records.

If you don't get to see it this weekend, don't worry. Other Marvel fans are looking out for you.

Plenty of people are reminding each other of this key hashtag: #DontSpoilTheEndgame.

Fans came out in full force for the premiere of 'Avengers: Endgame'