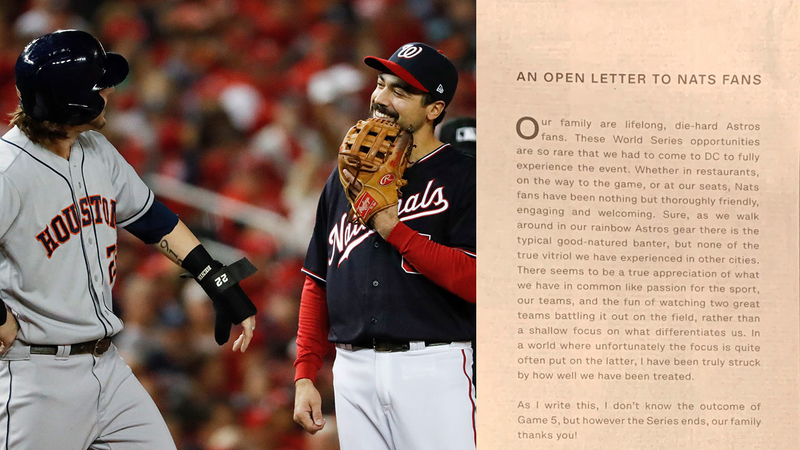 WASHINGTON, D.C. (KTRK) -- During this postseason so far, some Astros fans found out not everyone loves Houston, especially die-hard Yankees fans in New York.

In one instance, a Yankees fan was reportedly removed after taunting Astros pitcher Zack Greinke during the American League Championship Series.

Other Astros fans said they were heckled during Game 5 of the ALCS by some overly aggressive Yankees fans, but are holding no grudges.

But thankfully, it appears Astros fans had some kinder encounters in Washington, D.C. as the Astros played the Nationals. In fact, in the ultimate show of sportsmanship, one Astros fan thanked Nats' fans for their hospitality.

The fan, who remained anonymous, took out a quarter page ad in the Washington Post Monday called "An open letter to Nats fans."

The letter said, "whether in restaurants, on the way to the game, or at our seats, Nats fans have been nothing but thoroughly friendly, engaging and welcoming" to the Astros fan and their family who traveled to D.C. for the series.

Then, on Nov. 3, a group of Nationals fans returned the act of kindness by taking out two full-page ads to thank the Astros for a great season.

This ad was in today’s Houston Chronicle. Thank you Nats fans and congratulations. Your fans were gracious as well. #Astros pic.twitter.com/EFjAUEUjVb

One of the ads read, "Nationals fans everywhere want to thank the Houston fans for being such gracious hosts to us during the World Series. You were generous, welcoming, kind, and positive."