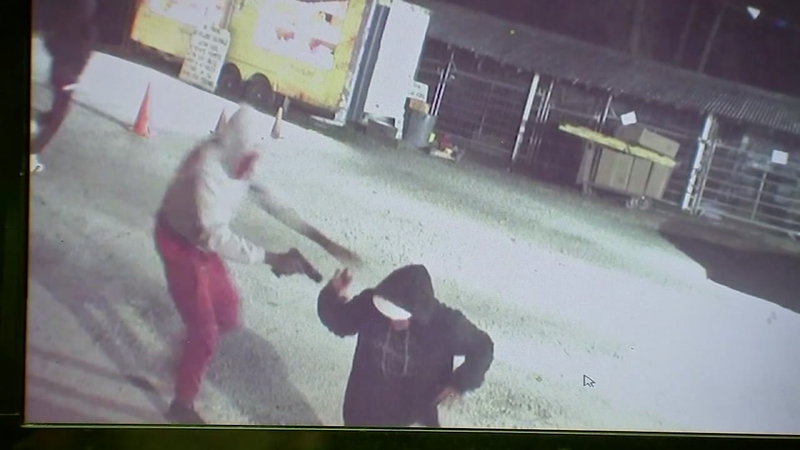 HOUSTON, Texas (KTRK) -- The longtime owner of a Harris County feed store is offering a $5,000 reward for information that leads to the capture and conviction of three men responsible for robbing a fireworks stand on his property on Christmas Eve.

"She hollered, 'They got guns!'" said one employee who was working that night and described what he and other employees saw.

In surveillance video from Ray's Feed Store on Cullen Boulevard near Fuqua, you see the three men pull up and get out of a white Ford Explorer.

One appears to have a gun in hand while he is assaulting an employee in the parking lot.

Doug, an employee who didn't want to give his last name, says he and two others working the fireworks stand were ordered to the ground as the gunmen demanded cash.

They were traumatized, he said, and the seconds seemed like an eternity.

"It's changed my life. I will never be the same again," Doug said.

The men grabbed the cash and armfuls of fireworks and were gone in seconds.

"It's the devil's work. That's all I know," said Les Ray. He's operated the feed store for 38 years and says it's the only robbery there in that entire time.

"I feel sorry for 'em," Ray said of the gunmen. If they return, he adds, he and his employees will be ready.

Ray says the gunmen got away with a significant amount of money. He's putting out $5,000 of his own money as a reward to help catch those responsible. He wants his loyal customers to feel safe as they come back to do business.

The three gunmen all wore hoodies, so he says it's difficult to see faces of the men. If you recognize any of them, you can contact the Harris County Sheriff's Office.