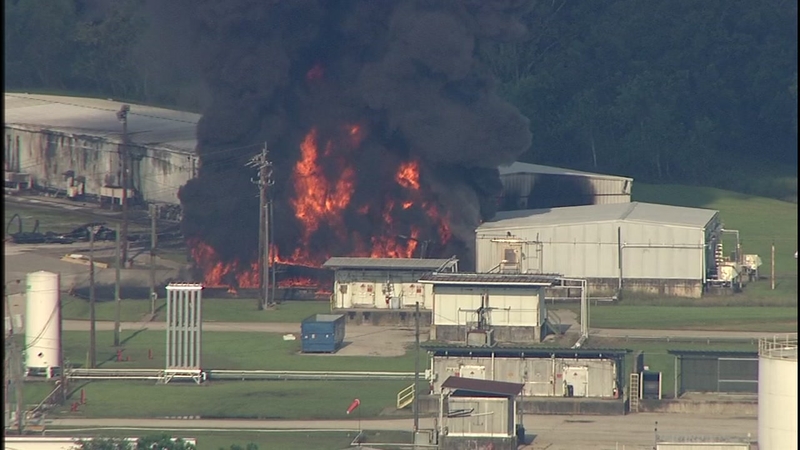 CROSBY, Texas (KTRK) -- People who live in a 1.5-mile evacuation zone around a Crosby chemical plant are being allowed to return to their homes after the facility was under the threat of an explosion due to flooding from Harvey.

Arkema gave notice of the lifted evacuation order early Monday morning after consulting with officials monitoring the scene. For now, though, residents are also advised to use protective clothing and drink bottled water until further notice.

"The Crosby Fire Department and unified command has determined it is safe for residents to return to their homes. The 1.5-mile evacuation zone around the Arkema Inc. facility has been lifted and is no longer in effect," the company said in a news release.

Arkema added the perimeter of the site is secured.

The plant was in danger of a large explosion due to flooding from Harvey. The plant took on fires and smaller explosions since late last week.

Residents near the plant were ordered out of their homes for what amounted to six days. On Sunday, the company decided to ignite the remaining combustible containers rather than wait for them to explode on their own.

Arkema ignited the remaining combustible containers in a controlled burn. 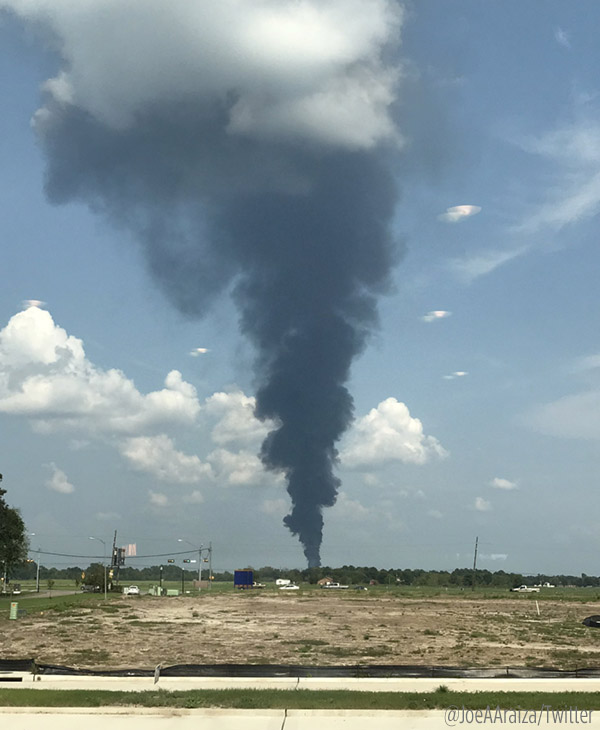 Arkema plant from 5 miles away.

"In a proactive approach, to minimize the impacts to the community by the Arkema Inc. incident, a decision was made by Arkema Inc. in coordination with unified command to take proactive measures to initiate ignition of the remaining trailers through controlled means," Arkema said in a press release Sunday. "These measures do not pose any additional risk to the community."

Breaking- smoke one more coming from Arkema plant in Crosby- said to have been proactively ignited by company #abc13 pic.twitter.com/cdIWcSYB5w

By Sunday evening, the containers had largely burned themselves out, according to Arkema.

Two of the nine containers filled with organic peroxides produced at the plant exploded last Friday, sending thick, black smoke into the air. It was visible for miles and thick enough to block the sun for anyone close enough to be under it.

Each container held 500,000 pounds of highly flammable materials inside. Sources had told ABC News that Arkema had expected the remaining container to explode over the weekend.

The ordeal has put a spotlight on plants like this one, especially for neighbors who had to leave everything behind, including cattle and horses, with no information about how long the evacuation would last.

When asked if they could return to feed the animals, they were told it was simply too dangerous to the evacuation zone. Airplanes and helicopters were being kept away as well.

Throughout the week, officials with the company have suggested the smoke from the fire isn't toxic. Sheriff Ed Gonzalez likened the effects to that of a campfire.


One first responder who was overcome by the smoke Thursday told ABC13 Investigates that they've been feeling the effects since day one and they are "still quite painful." They described pain in their eyes and throat and could barely speak because of the throat irritation.

At least eighteen people have been taken to hospitals so far, all complaining of problems relating to the smoke.

The EPA says it is continuing to monitor the smoke and air quality near the facility.

Crosby's Arkema plant, inundated with water, wasn't the only site to flood.

The Associated Press surveyed seven Superfund sites in and around Houston during the flooding. All had been inundated with water, in some cases many feet deep.

On Saturday, hours after the AP published its first report, the EPA said it reviewed aerial imagery confirming that 13 of the 41 Superfund sites in Texas were flooded by Harvey and were "experiencing possible damage" due to the storm.

The statement confirmed the AP's reporting that the EPA had not yet been able to physically visit the Houston-area sites, saying the sites had "not been accessible by response personnel." EPA staff checked on two Superfund sites in Corpus Christi on Thursday and found no significant damage.

AP journalists used a boat to document the condition of one flooded Houston-area Superfund site, but were able to access others with a vehicle or on foot. The EPA did not respond to questions about why its personnel had not yet been able to do so.

In at least one of Arkema's hazard mitigation plans filed with the federal government, plant officials acknowledged that flooding is a risk. The site sits in a FEMA "high-risk" floodplain that has flooded in the past, leading to a power failure. That time, the site only had six inches of water, a former plant worker said.

In that 2006 incident, strikingly similar to the ongoing incident, the plant flooded, lost power and materials ignited inside a warehouse.

In one of the several written violations over the years, the company was fined by the Texas Commission on Environmental Quality. There is no indication that the company made any changes in its backup systems in response.

Richard Renner, the company's CEO, told ABC13 Investigates he wasn't aware of the incident in 2006 and that they didn't anticipate six feet of water in the most recent flooding incident.

Renner insists the plant had multiple layers of backups in place at the time of the flooding. They all failed. When pressed about whether backup generators had been elevated as to not be inundated with water, plant officials said they didn't know.

A safety official with the plant this time around acknowledged they hadn't done enough to prevent the problems.

"Clearly that wasn't enough," said Arkema safety expert Darryl Roberts. "Clearly, as we go forward we will do something different."

As the company contemplates a new plan, residents who are waiting to come home are hoping there's a home left when they get back.

"I'm worried about what's going to be left there when I get back," evacuee Phil Mincey said.