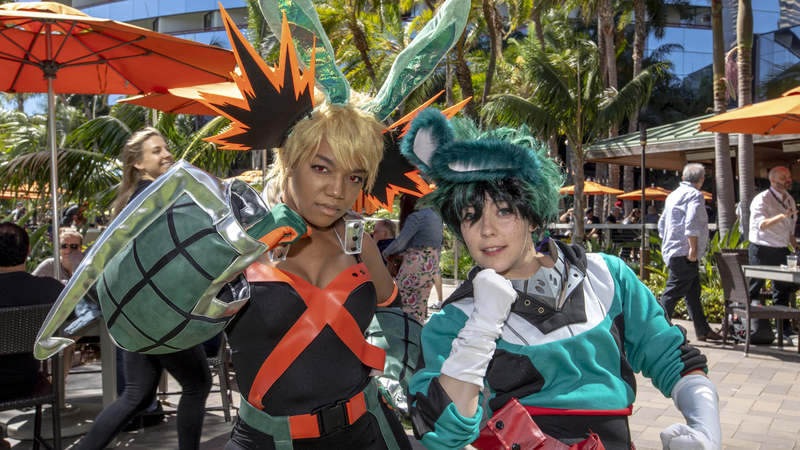 HOUSTON, Texas (KTRK) -- John Swasey might play some of the baddest villains around, but he's got quite a soft spot for anime fans across the country, especially in Texas.

"I've had people tell me I changed their life, and how do you respond to that?" he said. "I'm a voice actor."

Called one of the most prolific voice actors in America by Anime News Network, the Houston-born Swasey has dubbed hundreds of episodes of some very big anime shows, including "My Hero Academia," "Fullmetal Alchemist: Brotherhood," and "Soul Eater," all streaming now on Hulu.

The television subgenre, drawn in the Japanese style, is popular in nearly every country in the world, but is growing leaps and bounds in the U.S.

John Swasey is a man of many voices in the anime world, from (left to right) All for One in "My Hero Academia," to Van Hohenheim in "Fullmetal Alchemist: Brotherhood," and Lord Death in "Soul Eater."

"It's a good source of entertainment and an outlet for most," anime fan Quinn Peterson told ABC13 via Zoom.

Fueled by the growth of online streaming services, the anime market hit a valuation of $24.23 billion in 2020, and is expected to reach more than $43 billion by 2027.

But what the legion of American fans might not know is the incredible role Texas plays in the rise of anime in the U.S.

Before the 1990s, anime fans faced long waits for new shows and movies to make their way to the west, but according to ANN's Justin Sevakis, cheap real estate and advancements in technology made Texas fertile ground for a cultural explosion.

"The majority of anime produced in North America comes from right here, out of Texas, and I think that is really something to be proud of," Swasey said. "And Texas has a very vibrant Asian community all across the board."

Meanwhile, north of Dallas, Funimation has been churning out thousands of episodes of popular anime shows since 1994, licensing, translating and then dubbing dialogue in English for western audiences.

Today, anime dubs are made almost entirely in Texas, with some production work happening in Los Angeles and sometimes New York.

Anime in demand by diverse community of fans

All that work has resulted in a Texas-sized hunger for more stories, anime conventions and a wide variety of collectables, from manga books and t-shirts, to Funko POP figures and homemade fan art.

ABC13 digital producer Monica Grimaldo says her love of the genre was sparked as a little girl, watching Spanish-dubbed episodes of "Dragon Ball Z" while visiting Mexico during her summers.

She says over time, the appeal of these animated stories has grown to include a diverse community of fans.

Even more cool, Swasey said, are the bonds being created by people who might not have found each other but for their love of this culture, especially at conventions like Anime Houston in August.

"Some might be on the (autism) spectrum, they might be dealing with LGBTQ matters, stuff that outside this world, they do get bullied," Swasey said. "And they come here and it's just nothing but love."

Swasey, who founded the Anime Dallas convention in 2018, says he's seen a lot crisscrossing the country to meet with fans, but there's just something special about the homegrown crop here in Texas.

"Houston will absolutely represent and show up," he said. "My favorite part is just walking away and seeing these kids having fun."

Where to celebrate your love of anime in Houston