Andrea Yates: 20 years since the tragedy that shocked the nation 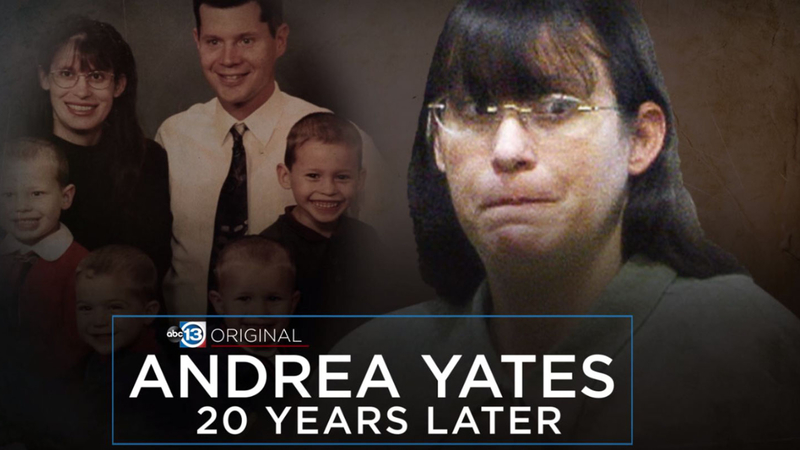 HOUSTON, Texas (KTRK) -- It was a tragedy that saddened the nation and brought postpartum illness into the spotlight. On June 20, 2001, Andrea Yates drowned her five small children one by one in the bathtub of her Clear Lake home.

Yates, who is now 56, was tried twice for the deaths of her children.

In 2002, she was convicted of capital murder and sentenced to life in prison. Her conviction was later overturned based on false testimony.

A second trial in 2006 resulted in a verdict of not guilty by reason of insanity. Yates was sent to Kerrville State Hospital, a mental health facility, where she remains today. She has now spent a third of her life institutionalized.

Twenty years after the tragedy, ABC13's Jessica Willey is hearing from those who saw the case unfold in the ABC13 Original "Andrea Yates: 20 Years Later".

Yates' former attorney and friend George Parnham shares how the case changed his career and gives a glimpse into her life now. Former paramedic John Delbosque also talks about why he will never forget that dark day, and Joe Owmby, lead prosecutor in both of Yates' trials, discusses the testimony that led to her murder conviction being overturned.

"She's where she wants to be. Where she needs to be," said Parnham. "And I mean, hypothetically, where would she go? What would she do?"

"He was face down and kind of bobbing in the water, and that's when I realized she drowned them," said Delbosque.

Delbosque has never spoken publicly about that day.

In interviews with HPD, the 36-year-old said she killed the children because she was not a good mother. Yates also told a Harris County psychiatrist she wanted to save them from Satan.

Her husband, Russell "Rusty" Yates was at work at NASA when the drowning happened. Despite losing all of his children, he stood by her.

Yates had attempted suicide twice, was admitted to psychiatric hospitals and treated for postpartum depression and psychosis before the drownings. A doctor warned the couple about having more children, in light of Andrea's illness. However, Mary was born in November 2000.

In 2005, an appeals court overturned the conviction based on false testimony by one of the state's expert witnesses.

Dr. Park Dietz testified that Yates got the idea about drowning her children from an episode of Law & Order, however no such episode existed.

Owmby said he and his team were blindsided by the testimony but did not expect it to have such a great impact.

There was a new trial in 2006 with a very different outcome.

"Thank goodness Dr. Dietz did what he did," said Parnham.

For 14 years, Kerrville State Hospital has been Yates's home. Parnham said he thinks of her like a daughter and still talks to her often. She comes up for review for release every year and waives it every single time.

At 80 years old, Parnham is still practicing law. He said Andrea's case has changed how people view mental illness, especially when it comes to the law.

As he reflects on the last 20 years, his only wish for Yates is that she is comfortable. He said she is happy and still remembers her first words to him.