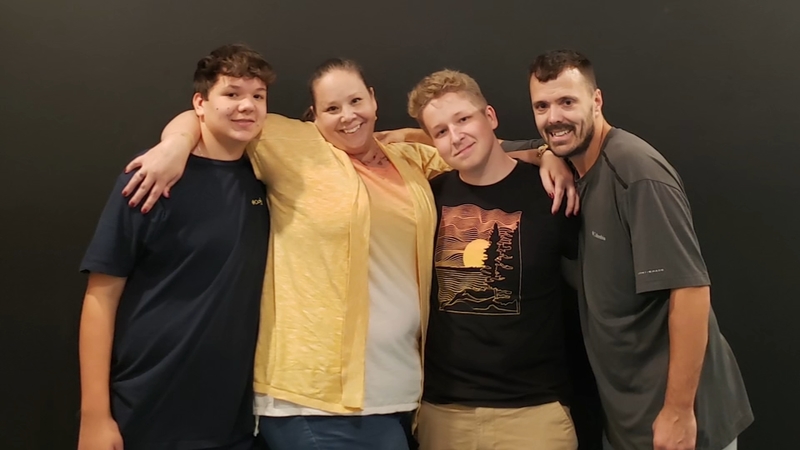 HOUSTON, Texas (KTRK) -- February is American Heart Month, raising awareness for the number one cause of death for women in the United States.

But not every sign or symptom of heart disease is obvious.

Amy Fireck always referred to her father's heart problems as "the beast". He was in and out of the hospital for much of her life and she grew up taking care of him. She then started to have her own health problems, including a pulmonary embolism and blood clots.

When Amy was 34, she suddenly felt a pain in her neck and chest that spread to her jaw and face. She went to the hospital and learned she had suffered an aortic dissection.

Dr. Dianna Milewicz, professor and director of medical genetics with McGovern Medical School at UTHealth Houston, said, "The aorta is the major artery or pipe that comes out of the heart that delivers blood to every part of our body. Right where it comes out of the heart, that part can be weak in some people. And over time, that part of the aorta starts enlarging, ballooning up almost like a defective pipe. It reaches a certain size before it becomes unstable and that can lead to aortic dissection. That's where the blood suddenly, instead of being inside the artery or inside the aorta, it goes into the wall and starts tearing the wall apart. Our current data says about half the people never even make it to the hospital. They will die suddenly."

Amy was rushed into surgery and survived. When she returned home, she wanted answers. Why did this happen to her? Is this what made her father so sick? And could it happen to her sons?

She started doing research online and found she had familial thoracic aortic dissection, a problem that is spread through genetics. Amy then discovered it was the same health issue that killed actor John Ritter.

Dr. Anthony Estrera, professor and chair of cardiovascular surgery with UTHealth Houston and Memorial Hermann-TMC, said, "You probably recall the story of John Ritter who had a similar condition that he did not know about. It turns out he had a family history of it in that his father probably died of it. And his brother had the disorder."

After Ritter passed away, his widow started the John Ritter Foundation for Aortic Health to spread awareness through genetic research and education.

Dr. Milewicz works with the foundation on genetic research. Her work looks at DNA to determine who is at risk for aortic dissection, and who can receive a life-saving surgery before it happens.

Amy reached out to the John Ritter Foundation and underwent genetic testing. She learned she and her sons had the gene that made them at risk for aortic dissection. They also learned they have the only variant of this gene in the world.

While Amy's surgery lowered her risk, she realized her sons would likely have to undergo the same procedure.

Doctors told Amy her son Ayden would likely not make it to 30 without having a medical emergency, so she brought him to Houston for the operation to replace the weak part of his aorta.

Ayden Fireck said, "I had fully just come to terms with my mortality, because I had accepted the fact that, because of this condition, there was a very high likelihood that I would live a shorter life compared to my peers and everyone else around me. Then they came out and said that there's a surgery that could be done to potentially fix it or, at least temporarily, stop the progression of the condition."

Dr. Estrera said, "Having this surgery and, having it go very well in him, he can live in essence, a normal life moving forward that any 17 or 18 year old would want to live."

After a long and sometimes difficult recovery, Ayden is now 18 and looking forward to a very bright future. He is in NJROTC and hopes to join the military before becoming a surgeon that can help people all over the world.

Amy's younger son will likely have to undergo the same procedure one day.

Doctors say the best thing to do is look for symptoms, and get genetic testing if you believe this runs in your family.

Dr. Milewicz said, "Right now a recommendation is if you have a family history of thoracic aortic aneurysms, or aortic dissection, that you talk to your doctor about getting tested. Let's say your father survived a dissection, and you go talk to your doctor when it comes to genetic testing, you would be up to a 50% risk for inheriting the gene."

Amy said she hopes people will watch this and get answers for their own families. "We just want to be able to help everybody else from having to go through this. In the beginning, it was real emotional. And then it was so satisfying knowing what took us, what's messing with us. But I still have that burning curiosity of what else can we figure out, what else can we do."