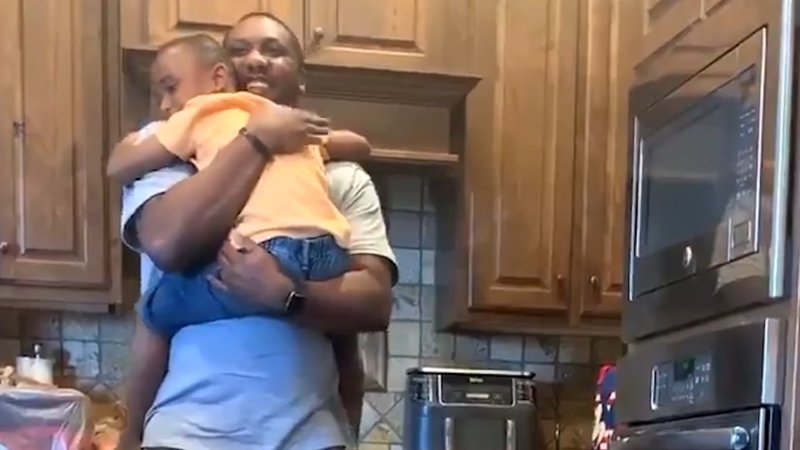 HEWITT, Texas (KTRK) -- "There is no success without sacrifice."

That quote by Baptist Missionary Adoniram Judson rings as true today as it did when he first penned it two centuries ago, and for Baylor men's basketball assistant coach Alvin Brooks III, the images he shared Tuesday are some heart-tugging examples of success.

"I haven't seen my sons in 27 days and they are waiting on me at the curb," Brooks tweeted along with a picture of his two boys.

I haven’t seen my sons in 27 days and they are waiting on me at the curb 😁 pic.twitter.com/qDj6fNGO69

Brooks, along with the entire team, was confined to "the NCAA bubble," which required every member of a team's traveling party to spend 48 hours alone in their hotel rooms and not interact with others until multiple negative COVID-19 test results were returned back-to-back. After that, teams were allowed to practice and compete but not much else.

Baylor's rise to the top of the NCAA March Madness bracket and the Bears' eventual win over Gonzaga 86-70 meant that Brooks and the entire team were kept away from everyday blessings and treasures like family.

Once the team returned to Waco, it wasn't long before his family eagerly awaited Brooks' arrival back home in the suburb of Hewitt.

"The words 'Daddy, you're back' felt a little different this time!" Brooks tweeted.

The words “Daddy, you’re back” felt a little different this time! #NationalChamps pic.twitter.com/lbV5faQjpI

Basketball aficionados and Houston natives alike will probably recognize that Brooks name. His father, Alvin Brooks II was head coach of the Houston Cougars in the '90s and returned as an associate head coach for 11 years before heading to Lamar University.

The younger Brooks is credited with helping the Bears claw their way to what was arguably their best season in program history in 2019-20 until this year's championship.

While reuniting with the family was priority one upon arrival, Brooks noted he'll have some chores to do once he's settled.

"I won't respond directly but I see a few comments about my lawn not being cut," Brooks tweeted. "I was on the road for 27 days and we were blessed enough to be cutting nets instead. Stay blessed and happy."

I won’t respond directly but I see a few comments about my lawn not being cut. I was on the road for 27 days and we were blessed enough to be cutting nets instead. Stay blessed and happy 😁

March Madness: Jalen Suggs hits buzzer-beater you have to see