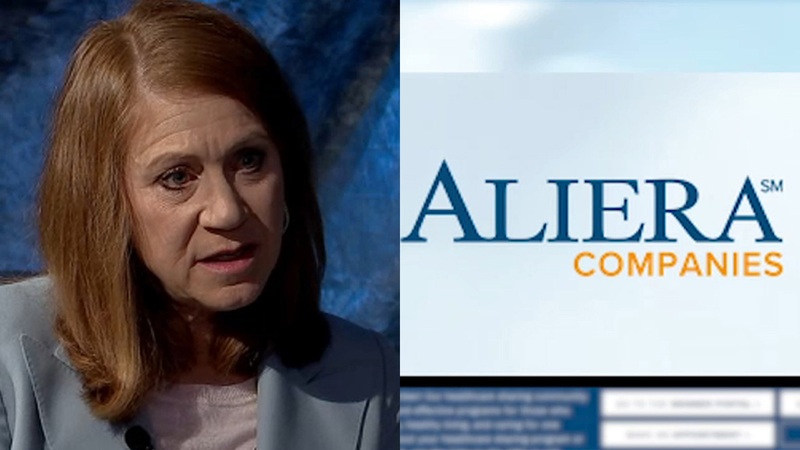 HOUSTON, Texas (KTRK) -- After a year of battling breast cancer that included two surgeries and 20 rounds of radiation in 2018, Jill Baine says ringing the bell signifying her battle was won was the greatest day, until the bills began flooding in.

"I rang the bell with great joy because I felt like my cancer days had ended," recalled Baine. "About two weeks after that, I began getting bills from Methodist hospital for these huge amounts of money."

Baine says before her 2018 diagnosis, she was very healthy, rarely needing to visit the doctor.

Looking to save money, Baine alleges in her lawsuit that she took the advice of her agent and switched her coverage to Aliera Healthcare, a faith-based health sharing ministry that boasts a range of affordable healthcare coverage.

She went in for her annual mammogram in June and was diagnosed with breast cancer.

She underwent her first surgery in late June and then again in late July.

Baine says Aliera refused to pay for her first surgery, but paid for her second.

"They paid for the second surgery in full but called the first surgery a 'pre-existing condition' which is the basis for this entire fight, since May one of 18," Baine said.

Baine says she and her surgeon, not understanding why she was denied coverage for what Aliera said was a pre-existing condition, filed appeals.

Eventually, Aliera did pay for some of her first surgery.

"Fast forward, after all that my radiation treatment got pre-approved for September, and I was assigned 20 radiation sessions, and the bill from Methodist (United) Hospital was a little over $195,000" she recalled.

According to her lawsuit, Aliera refused to pay for her radiation treatment claiming it was based on a pre-existing condition.

Baine says she repeatedly asked that they pay, but they refused.

Fighting to keep her bills from going to collection agencies, Baine reached out to attorneys Bryan Bleibdrey and Corey Ferguson in the Woodlands.

"For every dollar that Aliera gets from someone like Jill, 70 cents of that dollar goes to their bottom line in which they generate about $180 million annually, and which that they operate essentially as an insurance provider," explained Bleibdrey.

Aliera told ABC13 it is not an insurance company.

HCSM's are organizations in the U.S. in which health care costs are shared among members with similar beliefs.

What Baine's lawyers discovered was she was not the only one with complaints against Aliera.

A lawsuit filed last month by the Texas Attorney General on behalf of the Texas Department of Insurance claims Aliera does not qualify as a health care sharing ministry in the state.

The lawsuit alleges the company is operating as an insurance company without the right to.

In addition to Baine's complaint, there have been a number of similar complaints made in several states across the country including Washington and New Hampshire.

In a statement sent to ABC13, Aliera said, "Health care sharing ministries provide members with a more flexible method for securing high-quality health care at an affordable price, something that is more important than ever to Texas residents who face increasing costs for traditional health insurance."

The AG also obtained a temporary restraining order to stop the company from signing up new members in Texas while the case is pending.

Aliera said, "As we continue to negotiate in good faith with the Attorney General's office, we remain committed to serving all customers including health care sharing members in Texas and elsewhere, working with regulators to provide the health care sharing solutions these members need."

Bleibdrey says other Aliera members in Texas need to know about the lawsuits and says Aliera needs to be held accountable.

"They can't on one sense say they are a ministry where all costs are shared, and in another sense make 70 percent on everything they make and keep it for themselves," said Bleibdrey.

Last week, the Washington state insurance commissioner announced a $1 million fine against Aliera healthcare alleging it falsely presented itself as a "health sharing ministry" weeks after ordering a cease and desist.

In response to nationwide complaints and the cease and desist, Aliera said they "will utilize all available opportunities to address false claims made about the administration, marketing and other support services they provide."

Authorities in Georgia confirmed they sent complaints they received against Aliera to the FBI, including Baine's. When ABC13 asked Aliera about this, they responded saying, they "will cooperate with any inquiries and remain committed to resolving member issues and to working with state regulators."

At this time, the Texas state lawsuit is ongoing.

The Texas Department of Insurance did not wish to comment on the lawsuit.

However, TDI is asking any Aliera members who are having problems getting their claims paid or have a complaint to contact their office.

Below is the full statement from Aliera:

"Health care sharing ministries provide members with a more flexible method for securing high-quality health care at an affordable price, something that is more important than ever in Texas where residents face increasing costs for traditional health insurance, and the state is struggling with large uninsured population. The fact is that the Commonwealth Fund's Scorecard on State Health System Performance ranked Texas 49th out of the 50 states, and health care sharing ministries can help fill this gap and improve the quality of life for Texans.

"We will utilize all available opportunities to address false claims made about the administrative, marketing, and other support services we provide to Trinity HealthShare and other health care sharing ministries we represent. As we continue to negotiate in good faith with the Attorney General's office, we remain committed to serving all customers including health care sharing members in Texas and elsewhere, working with regulators to provide the health care sharing solutions these members need."