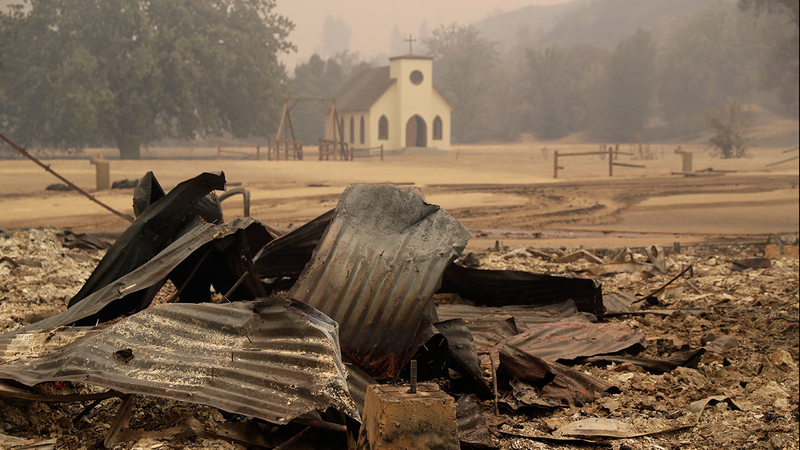 AGOURA HILLS, Calif. -- The Woolsey Fire burning in Southern California has destroyed the iconic Western Town at Paramount Ranch, a piece of Hollywood history used to film a variety of movies and television shows for nearly a century, the National Park Service said Friday.

The set was part of the NPS-managed Santa Monica Mountains National Recreation Area. The agency said it could not access the set due to the ongoing fire threat but said it was their "understanding that the structures have burned."

We are sorry to share the news that the #WoolseyFire has burned Western Town at #ParamountRanch in Agoura. We do not have any details or photos, but it is our understanding that the structures have burned. This area is an active part of the incident and we cannot access it. pic.twitter.com/oC4n7KR8ZT

No photos or additional details about the ranch's destruction were immediately available, the agency added.

The set was recently used as a filming location for the popular HBO series "Westworld." It's also seen in "Dr. Quinn, Medicine Woman," "Caught in the Draft," "The Lake House," "The Cisco Kid," "The Mentalist" and dozens of other productions.

According to the National Park Service, Paramount purchased the 2,700-acre ranch in the Santa Monica Mountains in 1927. Though it was most notably used as a wild west set, productions set in colonial Massachusetts, China and other locations around the world have been filmed on the ranch.

Paramount sold the ranch after almost three decades, and William Hertz acquired the southeastern portion of the property in 1953. He built a permanent western town on the ranch, which he sold two years later. The property changed hands multiple times until 1980 when the National Park Service purchased the property.

The ranch included the Paramount Ranch Racetrack, which closed the year after it opened following a series of fatal accidents. Though no longer a functioning track, it was used also throughout the 1950s and 1960s as a film set before it fell into disrepair.

When not used for filming, the ranch was open to the public. The surrounding area picnic areas and trails for hiking, mountain biking and horseback riding.