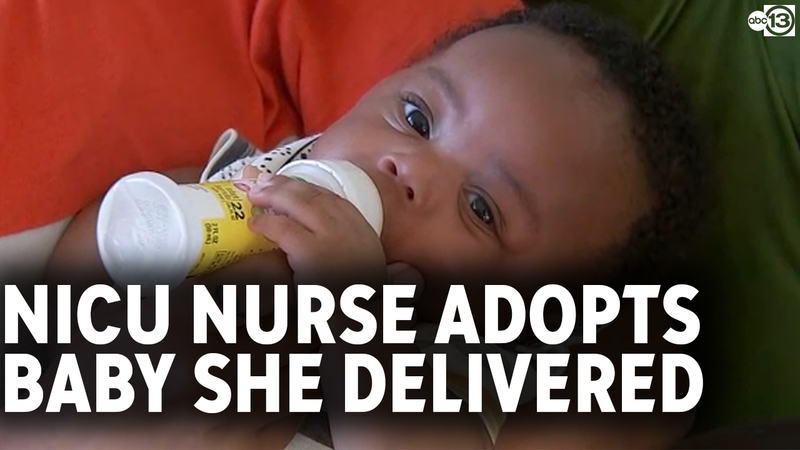 HOUSTON, Texas (KTRK) -- It's a story unlike any other. She's a 25-year-old nurse now in the process of fully adopting her tiny patient.

"I knew I wanted to be a mother, never in my wildest dreams did I ever think I was going to adopt," Claire Mills said.

Mills calls it God's plan. Little Jackson Jude was meant to be in her arms all along.

"It was my second week at Methodist downtown, I was called to this emergency C-section," she recalls.

RELATED: Nurse adopts baby who had no visitors for months-long hospital stay

It was back in May when Jackson's biological mother was having complications, so Claire was called in. The moment she locked eyes with that 3-pound, 10-ounce preemie, it all changed for her.

"Immediately felt an instant connection with him," she said. "He just felt very familiar to me. I feel like I know him."

RELATED: Nurse adopts boy she cared for in pediatric ICU

It was a very odd feeling and said she couldn't shake it.

Soon after, Claire would learn that Jackson's parents would be putting him up for adoption because they didn't have the means to support him. Claire knew this was not a coincidence.

Everyone involved has been very supportive, including Claire's mother who is more than happy to care for her soon-to-be grandbaby.

All of this is so surreal for Claire.

"Just kind of scary at the same time because I'm single, just got a house," she said with a smile though. "This is not how I saw my future."

Jackson-Jude has made a lot of progress since he was born, and in just a few short months, already his future family can't imagine their lives without their tiny gift from God.

"I know it's meant to be so I know everything is going to work out," she said. "It has to."