ABC13's Christine Dobbyn remembers one of last interviews with Bush 41 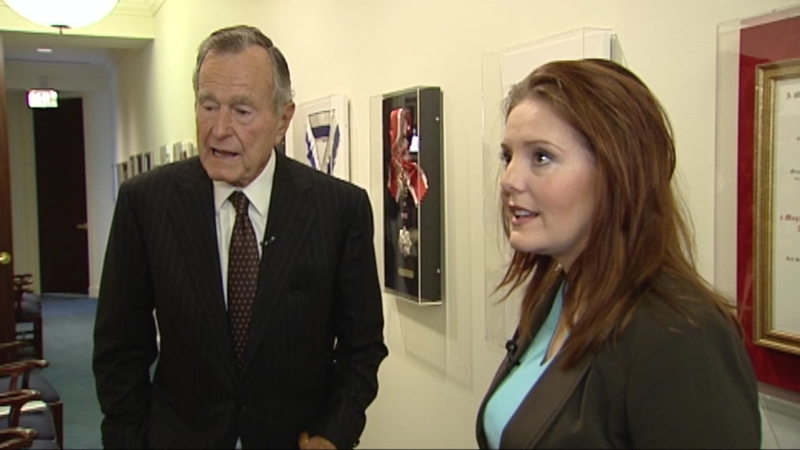 HOUSTON, Texas (KTRK) -- The journey home, a final trip through Houston, then all aboard 4141 through the heart of small Texas towns. It was a chance for Americans to say a final thank you.

In 2009, I got to spend a couple of hours with President George H.W. Bush He loved showing family pictures at his Memorial area office. As he ushered me around, he showed me a picture of him with his mother while he was president in the oval office. Next he said, "There's the president of the United States when he was but a lad." I replied, "This is you?" He said, "That's he."

After I had asked some questions in an interview, he insisted on sharing some fishing tales of his own.

President Bush said, "I listened to you, now you listen to me." We both laughed. He showed me his wall of fishing pictures and said, "We're standing out there with a fly rod trying to catch striped bass when big waves came in."

He added, "I was trying to keep standing, the wave broke over me."

I said, "Did you catch anything?" He replied, "I don't remember that day, but we usually catch a lot of fish. I can't do it anymore and stay balanced, but I just loved it."

President Bush left his mark on our nation, but in the boxcars of his life, he left his tracks beyond U.S. borders.

I asked during the one-on-one interview about President Reagan's 1987 speech when he said, "Mr. Gorbachev tear this wall down."

"How much did that play a role in what happened a couple of years later?" I asked.

President Bush replied, "It was a very profound and dramatic statement he made, but I don't think he was persuaded the wall should come down, because of what Reagan said. I think it helped facilitate the change."
We talked just a couple of months before the 20th anniversary of the Fall of the Berlin Wall.

I traveled to Berlin with photographer Linh Nguyen, where we covered President Bush and Mrs. Bush as they made one of their last international appearances together. Mrs. Bush walked in and said, "It's very exciting for all of us, big day."

There it was, Germans who lined up to say "thank you" to Bush for his contributions and roll in the reunification of Germany after the Cold War. One German man attending the ceremony said, "I think it's the last time you could see the most important statesmen of the 20th century."

Bush, former Chancellor of Germany Helmut Kohl and Mikhail Gorbachev, the last leader of the Soviet Union, were given a standing ovation for their role in ending the Cold War.

President Bush spoke to the crowd and said in closing, "Let me close by expressing my hope that Germany, the United States, and Russia will find ways to build the peaceful, prosperous future that our proud peoples want and deserve."