Aaron Wright and his girlfriend are accused of breaking into his ex-wife's home and shooting her four times.
KTRK
By Mycah Hatfield 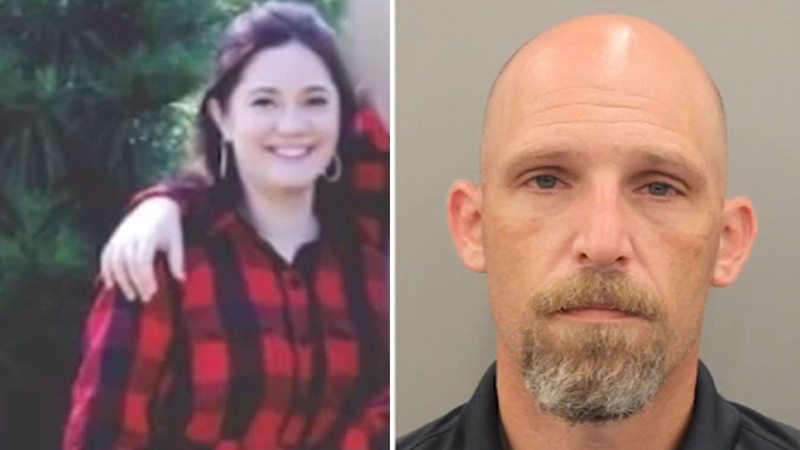 HARRIS COUNTY, Texas (KTRK) -- The family of a woman who was shot multiple times says they are now more concerned than ever for their safety after a judge allowed the suspect to have his GPS ankle monitor removed.

Aaron Wright was arrested shortly after the Harris County Sheriff's Office responded to a shooting at a north Harris County home on June 28, 2021.

He is accused of cutting off the power to his ex-wife's home, breaking in alongside his girlfriend, Carrie Daffin, and shooting the woman five times while the former couple's children slept in the neighboring bedrooms.

According to authorities, surveillance video captured Daffin and Wright walking toward the victim's house at 3:08 a.m. and running away two minutes later.

"You don't stand over somebody and put three more shots into their torso and not intend to kill them," one of the victim's family members said. "There is no question whatsoever that he is a killer and we are not so certain that he wouldn't attempt again."

Wright was charged with aggravated assault of a family member with serious bodily injury and a weapon and burglary with intent to commit another felony. He was released on a $175,000 bond.

Daffin was charged with aggravated assault with a deadly weapon and burglary with intent to commit another felony. She was released on a $90,000 bond.

Last Thursday, Wright's attorney asked that Judge Amy Martin remove his court instituted curfew and GPS ankle monitor so that he could get a job. His attorney told ABC13 he was at risk of losing his home and had strictly followed his bond conditions for nine months.

Martin agreed to remove the GPS ankle monitor but kept his curfew in place. The news was startling to the victim's family.

"We were completely caught off guard," the victim's family member said. "We never would have fathomed that they would fail us to this extent."

SEE ALSO: What the man accused of shooting ex-wife 4 times said as he left jail

They had serious concerns about their safety while Wright was wearing the ankle monitor, but now those concerns have grown.

"We feel like he's more dangerous now at this point," the family member said. "As more and more comes out on this case, his hope is going to diminish. He is going to realize no matter how much he lies and how much he tries to twist things, he is going to prison for the rest of his adult life."

Prior to the shooting, the victim had a protective order against Wright, which a judge declined to extend less than a year before the shooting.

The victim's family is concerned that Wright will attempt to "finish what he started" while the victim battles the physical and emotional injuries that are left behind.

While their immediate concern is their own protection, the victim and her family said they understand the pain and life-changing events other victims experience after going through something so traumatic.

"You see it every day on the news in Harris County," the family member said. "These violent criminals are being let loose on the streets to re-victimize their victims. How many times in the last time have we seen where someone went and finished the job? That is solely because they were allowed to."

ABC13 reached out to Judge Martin's office and was told she is out of the office this week. She is one of the democratic judges who was voted out during the primary election last month.