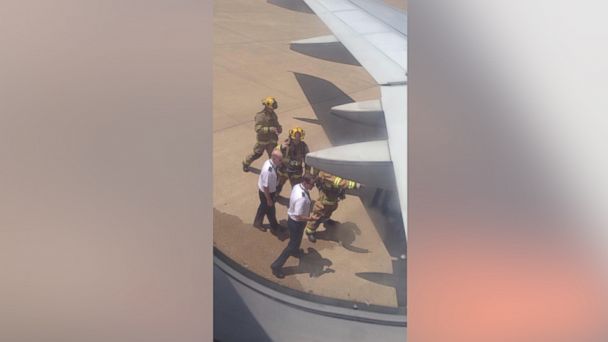 It was a rough afternoon for air travel at Dallas/Fort Worth Airport today.

One plane was forced to evacuate and another experienced a landing gear tire fire in separate incidents, officials said.

The American Airlines flight, from Dallas to Chicago, was ready for takeoff when the incident occurred.

"American Airlines Flight 1658, from Dallas/Fort Worth International Airport (DFW) to Chicago O'Hare International Airport (ORD) deplaned using emergency exits at gate A14 because of possible smoke in the cabin," American Airlines said in a statement. "Our fleet service team was still on the ramp and assisted passengers and crew with a successful evacuation of the aircraft."

The flight was carrying 141 passengers and a crew of five. The airline says three people sustained minor injuries during evacuation. The MD-80 jet is an older model aircraft -- one that American is currently phasing out of the fleet.

Firefighters at Dallas Airport also responded to a second airplane -- a Spirit Airlines jet that touched down from Orlando.

"Upon landing in Dallas, Spirit Airlines' flight 407 experienced a small fire on one of the landing gear tires, which was quickly extinguished by the DFW Airport's Fire Department," Spirit Airlines told ABC News in a statement.

According to the FAA, the brakes on the plane appear to have overheated. Airport officials said that the fire occurred only after the plane had completed most of its taxiing and the fire was put near the gate.

All the passengers deplaned safely and there were no injuries. Spirit says their maintenance team is in the process of repairing the tire.

The cause of the American Airlines fire is still under investigation.

Editor's Note: A previous version of this story stated that two planes had to be evacuated at Dallas/Fort Worth. The Spirit Airlines plane was not evacuated and the landing gear from that plane was not on fire upon touchdown.