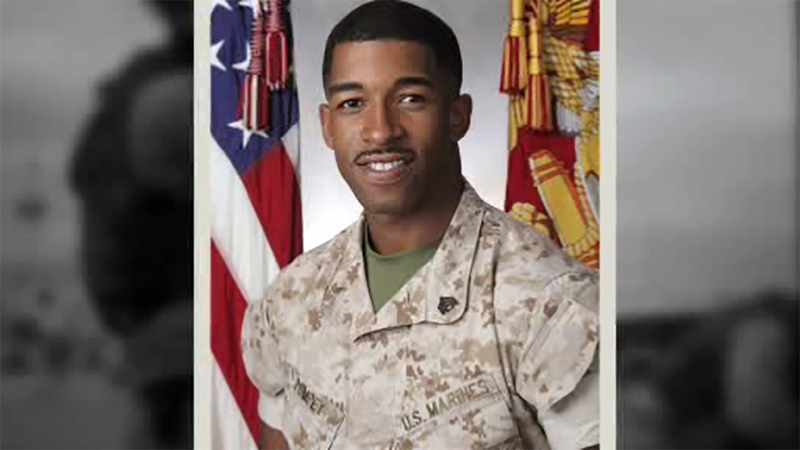 NEW JERSEY -- A decorated Marine veteran facing a mandatory three years behind bars on a gun charge will not be going to prison, after New Jersey Governor Chris Christie stepped in and commuted his sentence Friday.

"Oh my God, oh my God, oh my God, this isn't April Fools, right?" he said, when we told him the good news. "I don't know how to react. I'm grateful, grateful."
As we told you exclusively earlier this week, Pompey was fighting for his freedom after his arrest. Now, he won't have to serve a single day in prison.

"This issue has now turned over for the better," he said. "And we're going to recoup and, just, oh my God."

Pompey said this decision allows him to not only get back to his life, but also to continue pursuing his engineering degree at the University of Maryland.

"I just said, from the bottom of my heart, thank you," his wife said. "It's like you've given us our life back."

To combat gang violence, New Jersey lawmakers several years ago tacked on mandatory sentences for gun-related offenses. And even though Pompey's firearm was legal, it wasn't registered in New Jersey. The law has been updated to exclude service members, but it didn't apply retroactively to Pompey's case.

Pompey served his country over three tours of duty in Iraq and Afghanistan, for which he received medals for bravery. He also has a beautiful wife and young children, who were facing the prospect of him leaving them for different reasons than before.

Six years ago during a visit to New Jersey, Pompey was at a Fort Lee nightclub when his friend got involved in a fight and grabbed Pompey's gun out of his holster and carried it into a confrontation with police.

No shots were fired, and the friend was arrested. But so was Pompey.

While his gun was legally registered in Virginia, he had no New Jersey permit and was charged with unlawful possession of a handgun.
"I'm not a troublemaker," he said. "I don't cause trouble. I don't do anything bad. It was just a common mistake that I made."

Pompey had lost an appeal and was set to surrender to authorities next week, meaning his only hope was with Governor Christie, whom Pompey had petitioned for a pardon.
"Only help I am asking for is from the governor, that's the only one," he said. "Everyone from judges to lawyers say the only person who will help me now is the governor."

Attorney Evan Nappen had said it's an absurd waste of taxpayers money to put Pompey behind bars, accomplishing nothing while ruining a good man's life.

"He goes into state prison next week, where he will do three years minimum before he could even get parole," Nappen said. "This is a man who has done two tours in Afghanistan, a tour in Iraq. The only hope is for Governor Christie to exercise his power of pardon. Governor Christie in the past has stepped up and helped worthy individuals, and it's my hope and prayer that he does the same for Sergeant Pompey."

Because his weapons charge fell under the state's Graves Act, the judge had no discretion in the sentencing.
Report a typo to the ABC13 staff