By by Patrick Svitek, The Texas Tribune 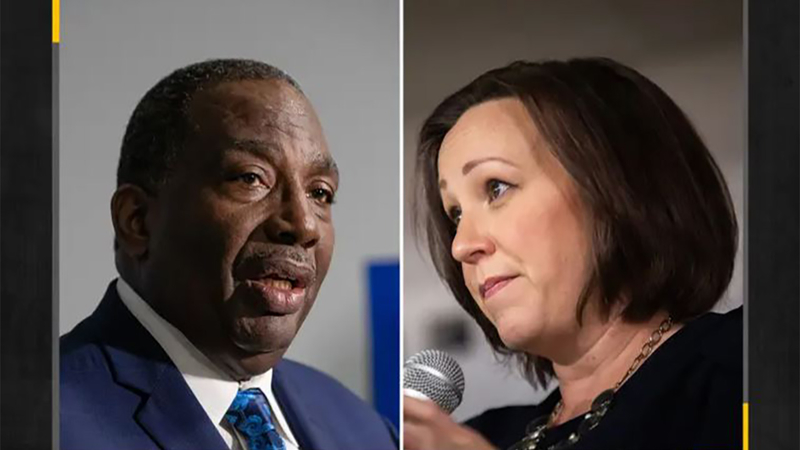 "I am humbled by the support we have received from all across the state, and am confident we have a decisive victory," Hegar said in a statement. "Together, we are mounting a Texas-sized winning campaign that will take down Senator Cornyn and deliver real results on health care, racial justice, economic opportunity, climate change, immigration, and gun violence. As a working mom who's lived many of the challenges facing working families across the state, I'm so proud to lead the effort to take back our state from politicians like John Cornyn who are more DC than Texas."

West, meanwhile, did not concede, saying he would make a statement early Wednesday and that his campaign was still waiting on more results.

Earlier in the evening, West and his campaign predicted the runoff would be tight and said that they expected it to come down to about 10,000 votes. Hegar had a 37,488-vote lead at the time she declared victory.

"Whether it's fighting for Hurricane Harvey relief, working to strengthen the criminal background check system to ensure convicted felons and domestic abusers cannot illegally purchase a firearm, or his dedication to providing much-needed resources to reduce the backlog of untested rape kits -- Senator John Cornyn has delivered for all Texans.

It took millions of dollars in outside money to help Hollywood Hegar clinch the Democratic nomination. In reality -- and without the special effects -- her candidacy isn't very impressive. She was passed over for endorsement by grassroots leaders across the state and nearly every elected Texas Democrat. She would not have won the runoff in Texas were it not for the support of national Democrats like Elizabeth Warren and Chuck Schumer, to whom she is now indebted.

MJ Hegar supports a public option in health care as a 'stepping stone' toward Medicare for All and has called single-payer healthcare 'the future of our healthcare system.' Hegar would also be a disaster for Texas' energy sector because she supports a carbon tax and cap-and-trade. We look forward to shining a spotlight on how ideologically out-of-touch Hollywood Hegar is with Texans and her inability to go off-script to have substantive policy discussions."

Hegar brushed off questions about her small margin during a news conference earlier in the night. She denied the margin was closer than expected, instead saying the turnout - near 1 million votes - was higher than expected and should concern Cornyn.

Hegar appeared to be the front-runner for much of the nominating process. She was easily the top fundraiser. Since launching her bid last year, she got the Democratic Senatorial Campaign Committee's endorsement in December, and she finished first in the 12-way March primary, getting 22% of the vote to 15% for West.

West proved a worthy opponent in the runoff, though, campaigning as the "true Democrat" supported more by the party in Texas than in Washington. Already backed by many Democratic colleagues in the Legislature, West picked up endorsements from five of his former primary rivals, none of whom got behind Hegar. He also inherited endorsements from the third-place primary finisher, progressive Cristina Tzintzún Ramirez, including that of U.S. Rep. Joaquin Castro of San Antonio.

While West continued to lag far behind Hegar in fundraising and spending in the runoff, he insisted he would be more efficient than she was, as he was during the primary.

Both the new coronavirus and George Floyd's death impacted the runoff, forcing the candidates to conduct their campaigns almost exclusively online and further centering issues of health care and racial justice. West in particular sought to seize momentum after Floyd's death, touting his long record on criminal justice reform in the Texas Senate.

While the differences between West and Hegar were clear from the get-go, they played nice with each other for most of the runoff. That suddenly changed as early voting got underway two weeks ago, when long-simmering tensions boiled over during a televised debate. West sharply questioned Hegar's allegiance to the Democratic Party, and she implied that West, a wealthy lawyer, has enriched himself in office.

West pointed out that Hegar voted in the 2016 Republican primary and gave a $10 donation to Cornyn in 2011, among other things. Hegar insisted her primary vote - for Carly Fiorina - was a protest vote against Donald Trump and said she contributed to Cornyn because she thought it was the only way she could get a meeting with him.

West did not buy her explanations and continued to attack her party credentials as early voting went on, while also suggesting her criticism of his business record was racially charged.

At the same time, Cornyn's campaign ratcheted up its efforts to meddle in the Democratic primary, launching radio ads - and then TV ads - portraying West as too liberal for Texas.

With the sparks flying - and the runoff fast approaching - Hegar's outside allies stepped into the fray. The DSCC was already helping fund the Hegar campaign's TV ads, but with only a few days left before the runoff, EMILY's List spent over $1 million on TV and digital ads boosting Hegar.

West also aired TV ads in the runoff's closing days, but Hegar's side maintained a staggering advantage on the air. By one count published Tuesday morning, Hegar's campaign and its allies outspent West $102 to $1 on TV and radio advertising.

After the runoff, Democrats will try to come together for the general election. During a Texas Tribune interview Thursday, Hegar stopped short of saying whether she would campaign with West if he is the nominee - and whether she would want him to campaign with her if she is the nominee. A day later, West suggested more openness to appearing with Hegar on the campaign trail this fall, but he said they would have to sit down and talk first.

While West increasingly portrayed the runoff as a David-versus-Goliath fight, Hegar suggested the contrary Wednesday night while answering a reporter's question about the DSCC's involvement in the race.

"I'm kind of the one who should have been the underdog," Hegar said. "I am just a combat veteran and a working mom, and I took on an establishment candidate, both in Sen. West and John Cornyn, that had a lot of establishment support ... a lot of endorsements from sitting representatives."