What officials are doing to make runoff election voting safe

By by Alex Ura, Texas Tribune 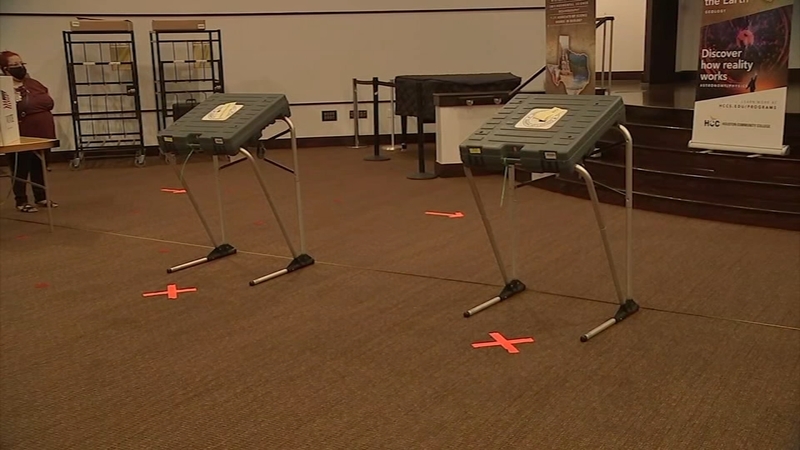 How officials are making runoff voting during pandemic safe

The upheaval of the coronavirus pandemic will reshape one of the most fundamental aspects of ordinary life starting Monday: voting.

Poll workers will begin greeting voters from behind face masks and shields as early voting begins in primary runoffs that will look and operate differently from any Texas election in the past 100 years. Although the first statewide election during the pandemic is expected to be a low-turnout affair - primary runoffs usually see single-digit turnout - the contest is widely regarded as a high-stakes dry run for the November general election, when at least half of the state's more than 16 million registered voters are expected to participate.

More than 30 runoffs are ongoing for party nominations to congressional, legislative and local offices. The most prominent race is the statewide Democratic contest to see who will challenge incumbent John Cornyn for U.S. Senate.

But the shot at working through a new set of considerations - and challenges - for running a safe and efficient election could be complicated by its timing. The runoff was postponed from May and takes place as the state's tenuous grip on controlling the coronavirus outbreak unravels into record-high daily infection and hospitalization rates.

"We're saying our prayers," Jacque Callanen, the Bexar County elections administrator, said last week. "With this spike in the numbers, I'm praying our good ol' election officials are going to hang in there with us."

Like other administrators, Callanen worked to complete a census of the county's regular fleet of election judges and workers, who tend to be older and at higher risk for complications from the coronavirus. She saw little drop-off, with most willing to work the election.

That was before the effects of Gov. Greg Abbott's reopening of businesses and dismantling of local health restrictions were fully felt, and the county was reporting 30 or 50 new daily cases of people infected with the virus. In recent weeks, that number has skyrocketed to hundreds of new cases a day. If her prayers fail, Callanen has a set of backup county workers ready to step in.

Most Texas voters will be left unable to heed the governor's recent warning to residents that the "safest place for you is at home." The state successfully has fended off efforts to expand voting by mail during the pandemic. But voters will have more days to go to the polls in person after Abbott doubled what is usually a truncated early voting period for runoff elections.

Texans voting in person will be met with many of the precautions that have become customary at businesses and grocery stores, including 6-foot distance markers and plastic shields at check-in stations. Poll workers will be offering masks and hand sanitizer. At least one county is advising voters to bring umbrellas to shield them from the hot Texas sun while they wait.

But many regular polling sites will have far fewer voting booths - and probably lines out the door - or will be shuttered altogether as officials try to minimize breaches of social distancing.

Collin County election officials typically set up 20 to 25 voting machines at their main polling place in their office building, but they will only be able to fit eight machines 6 feet apart. It likely won't be a problem for the runoff, but the county will have to be "as creative as possible" for November, said Bruce Sherbet, the county's election administrator.

"All the things we're doing for this will really be problematic for November," Sherbet said. "It's a tall challenge."

In a possible bellwether for electoral troubles in November, some counties have lost polling places unwilling to host voters during the pandemic. In Williamson County, officials were informed last week that one of its busiest sites - a community center that primarily caters to older voters - was scrapping plans to reopen for voting. In Bexar County, Callanen had to pull the county courthouse - a longtime voting site - and several school sites off her list of polling places. In Travis County, officials ditched regular voting sites at nursing homes, grocery stores and Austin Community College.

Abbott's postponement of election day from May 26 to July 14 granted election administrators more time to set up public health precautions. But with the runoff election moving forward at what is arguably the state's worst point in the pandemic so far, poll workers will be forced to navigate keeping voters safe while safeguarding their right to vote.

In Chambers County, a smaller county east of Houston, County Clerk Heather Hawthorne was waiting on guidance from the Texas secretary of state's office after the local public health authority asked if poll workers can direct masked voters and those not wearing masks to separate voting machines.

"Everybody is just trying to help figure out, as our Texas numbers grow, what we're going to do to provide safe voting locations," Hawthorne said.

Texas does not have a statewide requirement for masks, and the Texas secretary of state's office has made clear to local officials that voters cannot be required to wear masks to enter a polling place. Poll workers also cannot require temperature checks, and they can't ask voters whether they have experienced symptoms related to COVID-19, the illness caused by the new coronavirus.

And voters who show up with symptoms can't be turned away. The secretary of state's guidance indicates poll workers can remind people about the curbside voting option or consider whether to move symptomatic voters to the front of the line.

"You cannot deny a person the right to vote," said Yvonne Ramon, the Hidalgo County elections administrator. "But we're hoping our voters and our community are all working to be safe."

Most counties will be aided by a short runoff ballot that will allow voters to move quickly in and out of polling sites - a stark difference from voting in November, when voters will lose their option to vote straight-ticket by making just one selection and will face a significantly longer general election ballot with previously postponed municipal contests tacked onto the bottom.

For voting rights advocates, the low-turnout election will still conjure an added layer to voter protection efforts as they work to track disenfranchisement exacerbated by the pandemic, particularly among voters of color who are unequally burdened by regular breakdowns in the election process and whose communities have been disproportionately afflicted by the coronavirus.

"Even when conditions are ideal, you still have late polling place openings, very long lines, machines break down, poll worker confusion and a bunch of other things that make voting more difficult for Texans," said James Slattery, a senior staff attorney for the Texas Civil Rights Project. "There's no reason to think we won't see those problems again during the primary runoff because we literally see them during every election that happens in Texas. Now, you have a second set of problems that arise because we're conducting an election in a pandemic."