6 people shot, 4 killed in night of violence across Houston 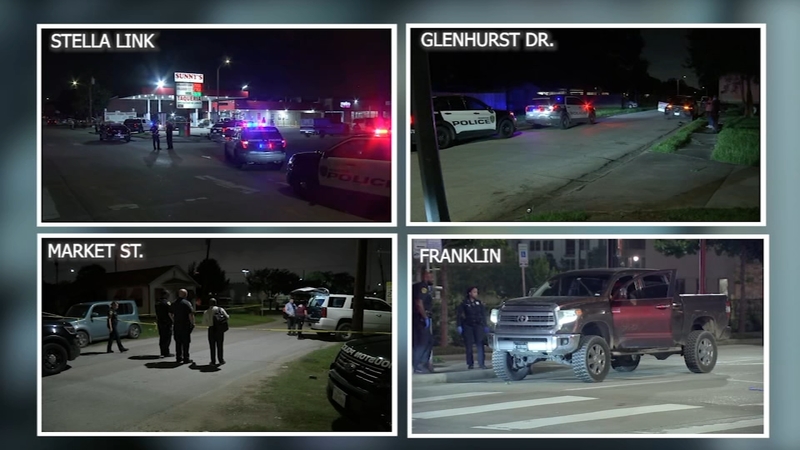 5 people shot, 3 killed in night of violence across Houston

HOUSTON, Texas (KTRK) -- There were at least six people shot at five different locations across the city of Houston overnight, and four of them were killed.

There have been 199 homicides this year alone. That's up about 35% compared to last year, which counted 147 homicides.

Houston police responded to a reported homicide in the 7000 block of Bellfort Street around 6:30 a.m. Wednesday.

Upon arrival, officers found a man in a car with a gunshot wound to the head. He was pronounced dead at the scene.

Information about a suspect or possible motive in the shooting was not immediately available.

HPD Patrol officers are on the scene of a Homicide in the 7000 block of Bellfort Street. One male has been located and confirmed deceased. #HOUnews

A man and a woman flagged down an officer for help at the intersection of Franklin and Austin after they were both shot multiple times around 12:45 a.m.

The victims told HPD one or two suspects on foot approached their car and gunned them down. They drove as fast as they could away from the scene before flagging down a police officer.

The man and woman were both transported to the hospital in critical condition.

Police did not have further information on a suspect or motive in the shooting.

Downtown officers are on a shooting at 1400 Franklin. Two patients were transported to area hospitals. #hounews CC9

Around 12:40 a.m., police responded to a shooting on Market Street near Benson in northeast Houston.

Upon arrival, officers found a man in his early 60s dead in the street from an apparent gunshot wound to the chest.

Neighbors say the victim lives in the neighborhood and usually walks along Market Street to get to his house.

The victim still had his personal belongings, so officers do not believe the shooting was linked to a robbery, HPD said.

Police say one neighbor heard a gunshot but didn't call to report it. Another neighbor saw the victim in the street and was able to piece together what happened.

Northeast officers are on a shooting at 4000 Market St. One victim was found deceased upon officers arrival. #hounews CC9

Police responded to a shooting at a home in the 6000 block of Glenhurst Drive around 10:45 p.m. Tuesday.

According to police, a man in his 70s was letting someone stay at his house. The homeowner reportedly got into an altercation with the guest over paying rent.

Police say the homeowner asked the individual to leave. That's when the guest came to the home and kicked in the door, according to HPD.

An altercation broke out and police say the homeowner shot and killed the guest.

Police say the homeowner is cooperating with investigators.

Officers are working to determine charges in the case. No one had been charged Wednesday morning.

Around 8:30 p.m., police responded to a fatal shooting at a gas station in the 9700 block of Stella Link Road.

According to HPD, the victim was standing at a gas pump at Sunny's Food Store when he was approached by several males.

Multiple shots were fired, and the man was pronounced dead at the scene.

Police believe the victim may have been targeted.

Investigators are reviewing surveillance video at the gas station.

Police say the suspects left the scene in a white pick-up truck.

Southwest officers are at a shooting scene 9700 Stella Link. Adult male deceased at the scene. 202 pic.twitter.com/uvzrwLXc9F