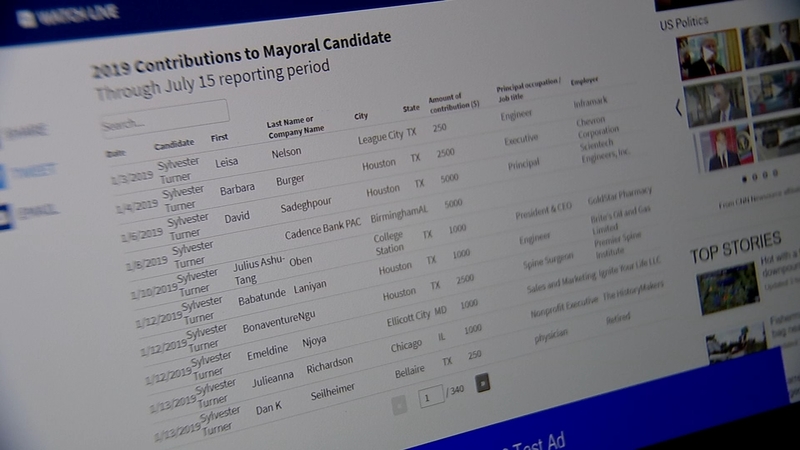 HOUSTON, Texas (KTRK) -- The multi-million dollar, 12-person race for Houston's mayoral seat is underway ahead of the Nov. 5 election and 13 Investigates has made it easy to see where candidates are getting their funding.

Candidate Tony Buzbee's $7.5 million self-funded campaign is the largest in the city, as of the July 15 reporting period deadline.

Donations to current Mayor Sylvester Turner come in second as he runs a nearly $3.2 million campaign followed by Bill King, who has garnered more than $670,000 in donations, and Kendall Baker, whose $15,650 campaign is mostly self-funded.

Candidate Derrick Broze raised $1,379. Naoufal Houjami has spent about $500 of his own funds on his campaign.

Current Houston Councilmember Dwight Boykins announced his candidacy this summer and reports raising $140,174 (due to a data error, an earlier version of this post indicated Boykins had not filed a report.) Former Houston city councilwoman Sue Lovell also joined the race for mayor in July and has not reported any donations either. Candidates Victoria Romero, Demetria Smith, Johnny "J.T." Taylor and Roy J. Vasquez also did not list any donations.

13 Investigates created a searchable database of every donation made to declared candidates through the July 15 reporting period.

Who donated to the candidate you're supporting? Which candidate did someone who listed their occupation as "gadfly" donate to? Have any of your coworkers made donations? What about your neighbors and friends?

Type search terms in the field below to browse by candidate or search for specific names or occupations.
On a mobile device? Click here to make the database full screen.