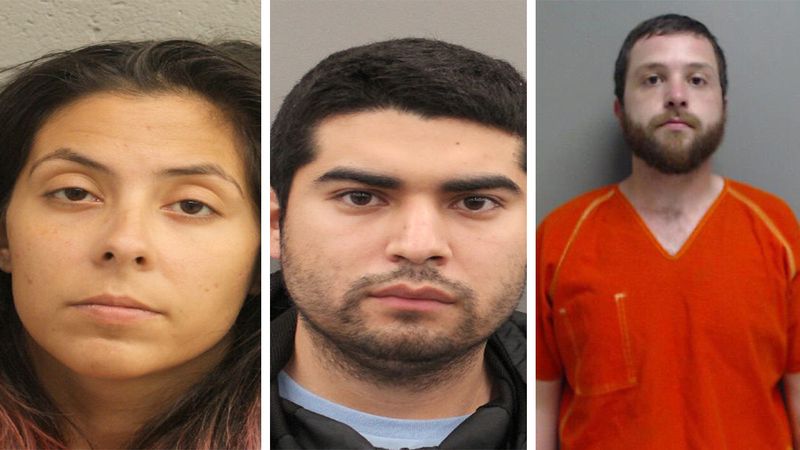 3rd person charged in connection with death of 5-year-old

JASPER, Texas (KTRK) -- A third suspect was arrested in connection to the death of 5-year-old Samuel Olson.

Twenty-seven-year-old Dylan Ray Walker was booked into the Jasper County Jail on Thursday.

Eyewitness News learned a Jasper County grand jury indicted Walker on a tampering charge with an intent to impair. He's accused of helping Theresa Balboa, also charged in connection to Samuel's death, move the 5-year-old's body. Balboa and the child's body were discovered inside a Jasper motel room.

It was not immediately clear how Walker knows Balboa.

However, Walker's mom told ABC13 Friday morning that her son was the one who reported Balboa's location at the motel to authorities through a Crime Stoppers tip.

Texas Rangers arrested Walker on Thursday, just after the indictment was handed down. He later posted his $125,000 bond and was released.

Now, there are now a total of three people charged in connection with Samuel's death. Balboa, who is the girlfriend of Samuel's father, her roommate, Ben Rivera, and now Walker, are all charged with tampering with evidence.

Rivera bonded out of the Harris County Jail Thursday after meeting his $100,000 bond. Rivera is accused of helping Balboa hide the lifeless body of the 5-year-old boy.

As the second person charged in Samuel Olson's death posts bond, a bombshell development has been revealed.

This comes after prosecutors believe they found the weapon that led to Samuel's death. No specifics were given as to where the weapon was found. Additional testing is being performed on it to confirm whether it was used to kill Samuel.

Balboa is still in Harris County Jail on a $600,000 bond. Her next court appearance is next month. Rivera is due back in court in September.

Samuel was found dead in a plastic container wrapped in a tarp and duct tape in a Jasper motel room on June 1, along with Balboa, his father's girlfriend.

Court documents offered grim insight into Balboa's alleged moves to hide the boy's body. Her roommate was said to have helped her.

Although Balboa, Rivera and Walker are all charged with tampering with evidence in the case, no charges have been filed for the child's murder.