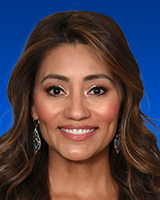 Reagan Bregman said things are different after games these days and loves every minute of seeing her husband, Alex Bregman, in his new role off the field as a dad.

HOUSTON, Texas (KTRK) -- In a World Series, with a new baby boy, and running an athleisure company, Reagan Bregman is more than excited for her husband, Alex Bregman, to take the field against the Phillies.

But first, she sat down with morning anchor Rita Garcia to talk about "life" since becoming a new mom and finding her balance.

"I think the biggest challenge is probably the sleep schedule with the baby because baseball games go late. Like the one in Seattle that went eighteen innings. It was just so long. I'm glad I had enough bottles that I was prepared," Reagan said.

Sleep is precious these days for the Bregmans, but together Reagan said they're navigating their new life as a family of three since welcoming their son, Knox, in August.

Since then, Reagan said she's been focused on her family but finding more time to get back into running her company, Exiza.

It's described as an ethical athleisure company made by women for women.

Reagan said she started the line with her mom.

"It's like my baby right now. I love it. We just launched our new 'Breaking Barriers' collection, which is really cute over the summer, and so I've just been working on that. I took a little break when the baby was born, but now, I'm kind of starting to get back into it again," Reagan said.

The Astros are headed back to the World Series, which is their fourth trip in the last six years, and it turns out, it's not just the players that have their game day ritual and superstitions.

"If we win a game, I usually will like to wear the same outfit in the next day, because it's good luck. Alex will keep the same haircut. That's good luck. If I sit in a certain seat like; Me and his family, my family will sit in the same order, because that's good luck. Especially if he's like hitting well," Reagan said.

Aside from that, Reagan said they've also focused solely on the game.

They drown out any noise from past seasons and look ahead.

"On the field, stuff speaks for itself, you know. So, I feel like honestly just ignoring it. Even at the games, we had a great experience in New York. Honestly, I was a little worried. I didn't know how it would be, but, no one was really too rude to us. No one said anything, but if they do, it's just kind of like, 'OK,' And move on and ignore it, and just cheer on our team, and that's it," Reagan said.

Plus, she said things are different after games these days, and loves every minute of seeing Alex in his new role off the field as a dad.

"There was one moment when we were in New York recently when my son was about to go to bed, and he gets really chatty right now before he goes to bed, because he's starting to make little noises. And my husband leaned down. He's talking to him. He's like, 'You know, if we win one more, we're going to the World Series.' I posted this on Instagram. He's talking back to him. He's just making these little noises and looking at my husband, smiling. And I was like, 'This, is just the cutest thing ever,'" Reagan said.