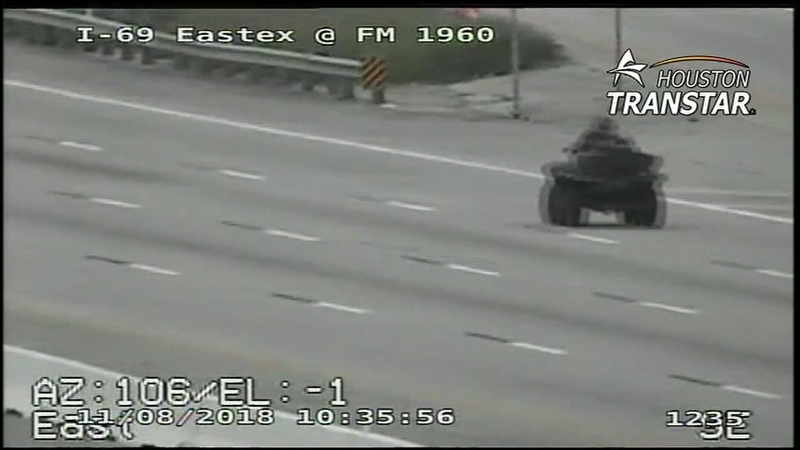 HOUSTON, Texas (KTRK) -- A 15-year-old has been charged with felony evading after leading police on a chase while driving an ATV on the Eastex Freeway.

Humble police confirm the 15-year-old captured his ride on Snapchat. Eyewitness News blurred his face in the video because of his age.

Police tell us it all started Thursday morning when an officer noticed the teen driving the ATV down Wilson Road near Humble High School and tried to pull him over.

It is illegal to drive a four-wheeler on a public street.

When the teen didn't stop, police chased him to Homestead, but that's where they lost him.

Harris County sheriff's deputies caught up with him on Lauder Road and then went over to the freeway in the northbound lanes, where the teen was spotted on Houston Transtar cameras traveling past FM 1960 and then Townsen.

Officers held back traffic while they followed him. At one point, a DPS trooper joined in and was right on his tail.

The hour-long pursuit eventually ended off the FM 1340 exit, where the teen surrendered. Deputies took him over to the Tractor Supply Co. to get the ATV off the freeway and took him into custody.

One driver saw the whole thing while she was out running errands.

"I didn't know what was going on. I didn't know anything until the cop pulls into the car wash and I'm like, 'What the heck?' and then the four-wheeler comes out and the cops start chasing him and I'm like, 'Oh my God,'" said witness Jennifer Rodriguez.

The teen was transferred to juvenile probation.

A suspect on a 4-wheeler is leading police on a chase through northeast Harris County.