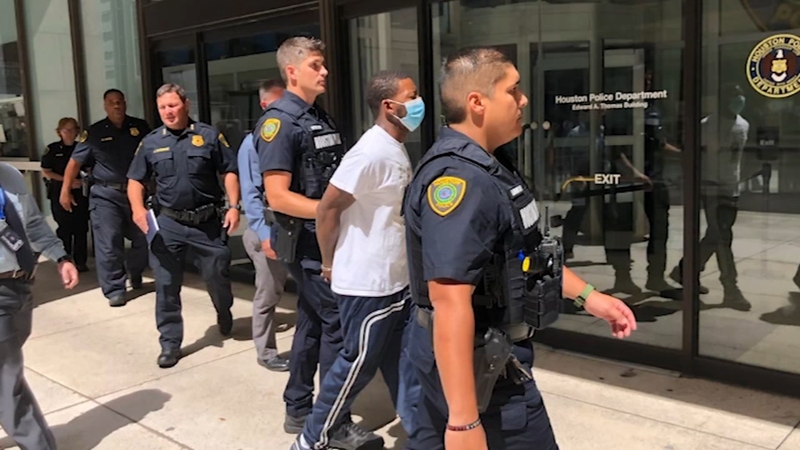 HOUSTON, Texas (KTRK) -- A judge has granted bond for the man accused of killing a 17-year-old in a road rage shooting following an Astros game last month.

Gerald Wayne Williams, 34, turned himself in on Monday and is now charged with murder in the shooting death of David Castro during the incident on July 6.

UPDATE: Gerald Wayne Williams has turned himself in to police with Quannell X at HPD Headquarters. Chief @TroyFinner and investigators will hold a media briefing at 12:30 p.m. today. It will be live streamed. #HouNews pic.twitter.com/A3yZjDjVvv

Following his arrest, Williams went before a judge who granted him a $350,000 bond. If released, the judge ordered that Williams would have to wear an ankle monitor and be subject to house arrest. During court, the judge mentioned a witness reported seeing Williams' arms extended out of a car window firing a gun. In addition, Williams reportedly told someone at a family gathering that he "messed up" after an incident in traffic.

Gerald Williams went before a judge today after being charged with the death of 17-year-old David Castro. Listen to complete details of his court appearance.

Williams claims he has a "rock solid alibi" which is that he was at a party at the time of the shooting.

When asked about information in the charging documents that Williams' phone was said to be pinged in the area during the time of the shooting, and if Williams was the owner of the white Buick, Quanell X said he has not spoken to Williams about those details.

Gerald Wayne Williams, 34, can be seen surrendering outside the Houston Police Department after being charged with murder in a road rage shooting that left a 17-year-old killed after an Astros game last month.

After Williams' arrest, Mayor Sylvester Turner, who added additional reward money on the city's behalf in the case, expressed his gratitude to police and the community tipsters:

"I thank Police Chief Finner, HPD investigators, and the community for the collaboration that led to the surrender and arrest of the suspect. The constant flow of eyewitness tips, information about the vehicle, and the suspect's description kept this crime front and center for several weeks.

The arrest will not bring back 17-year-old David Castro, but I hope and pray that it brings comfort to his grieving family as they take a step toward justice and healing. This case is a tragic reminder that guns, road rage, and reckless behavior have deadly consequences.

The shooting was senseless and indefensible, and we must work together to ensure that an incident like this never happens again in our City."

Chief Finner said the department received about 100 tips on the suspect wanted for killing 17-year-old David Castro in a road shooting after an Astros game last month.

A records search by Eyewitness News showed Williams was convicted in 2008 of two counts of aggravated robbery with a deadly weapon, resulting in a 13-year prison sentence. He was released last October.

Before the 2008 conviction, Williams was charged for robbery in three hold-ups of Family Dollar stores, documents state.

One video from police showed the suspect's vehicle downtown on Rusk and Chartres, while a second angle showed him driving through the intersection of Chartres and Commerce.

According to police, the vehicle is 2011-2013, white, four-door Buick LaCrosse CXL premium with round fog lights and 7-spoke rims.

An ABC13 viewer said they ran across an online sales advertisement for a car that looked like the same one in the video.

SEE ALSO: Dad to wanted gunman: Does hand gesture 'require you to execute' my son?

After flagging the ad, our reporters helped that viewer turn the tip over to authorities.

WATCH: Houston police released two surveillance videos showing the suspect's car driving around downtown the night of the shooting that killed a teen on his way's home from an Astros game. Hit play for a closer look.