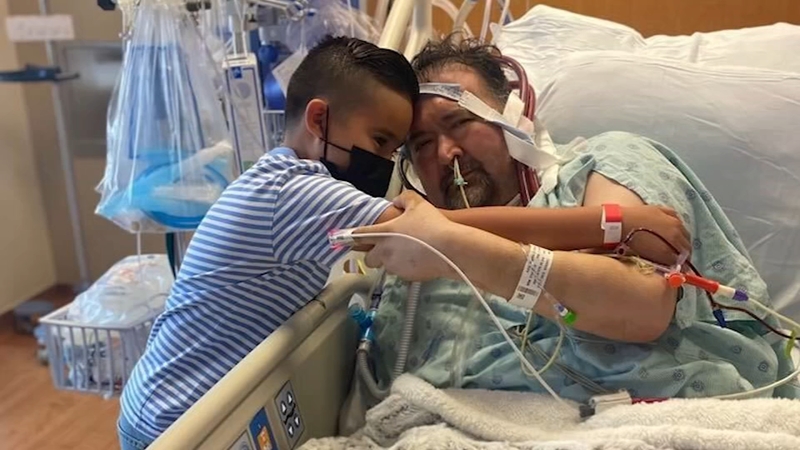 Dad finally home from hospital after 6-month battle with COVID

HOUSTON, Texas (KTRK) -- With the highly contagious delta variant spreading across our region, hospital officials say they continue to see more patients, but one family is making it their mission to encourage others to get vaccinated.

After six months, and a long battle against COVID-19, Rogelio Avila is set to return home.

His wife said it all started back in February. The Avila family was among the many Houstonians snuggled inside after losing power during the February storm.

"I told my husband, 'Something is not right' because my chest is hurting," Sandra said.

Sandra, her husband and their three children all got COVID-19. She and her husband had to go to the hospital for their symptoms.

A week later, she went home. But Rogelio remained in the hospital.

As Rogelio was fighting for his life, the couple's then two-year-old son ended up in the hospital too. Sandra said he had Multisystem Inflammatory Syndrome, something he got after having COVID-19.

With kids heading back to school soon, health care officials say they will continue to test the data on a safe way to vaccinate those under 12. Officials at UT Health started a study, proving that kids can also develop COVID antibodies.

With her husband and son both in the hospital, Sandra said it was almost too much to bear.

Her son got better, but Sandra remembers some dark days.

Like the day the hospital staff told her to prepare for what could be the final days of her husband's life.

"If he doesn't progress in the next 48 hours, you're going to have to start bringing your family in so that we can go ahead and give him his final goodbyes," Sandra said, reenacting her conversation with his doctor.

Sandra said she and her family prayed and prayed. Then things started to turn around, and Rogelio began improving.

His lungs were badly impacted by the virus, but as he got better, he became a good candidate for a double lung transplant.

Rogelio received the transplant several weeks ago. His wife said he's doing well and that he'll be home soon.

Sandra said her family is grateful and more appreciative of each moment they share.

While she's happy her husband is coming home, he still will need months to heal. His immune system will need to gain strength again, and that's something that concerns Sandra.

While she's vaccinated, her kids aren't old enough to get the vaccine yet, and neither are their peers.

"My main concern is for them to go to school and come back and bring something that's going to affect or harm [their] dad," Sandra said.

It's been six months since Rogelio went to the hospital, and now, Sandra said she simply doesn't want any other family to face the same fate which is why she's encouraging people to get the vaccine.

"Why would anyone want that to happen to them when they could have prevented it, you know? I just think the vaccine is a form of protecting yourself," she said.

Sandra hopes her family's story encourages others to get the vaccine.

Meanwhile, healthcare officials say the delta variant could be leading more people to get their first dose. Houston Methodist said it's seen more people getting vaccinated.

It's the first time they've seen those kinds of numbers since the beginning of June.

"We have started to see trends of increased first dose vaccinations over the past few weeks which has been encouraging. It still early, these are very early signs. But, we like what we're seeing," said Tesha Montgomery with the Houston Methodist Physician's Organization.