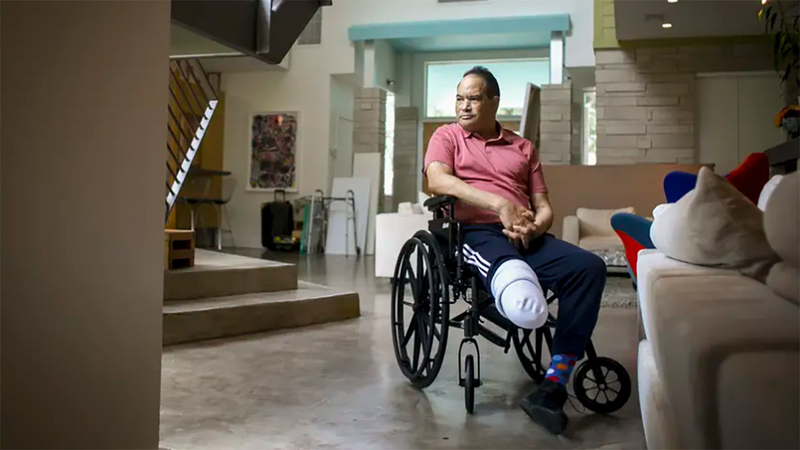 AUSTIN, Texas -- For a week now, state Rep. Garnet Coleman has been hiding out in Texas, wondering if police are going to track him down.

While dozens of other Texas House Democrats fled to Washington, D.C. to block a Republican voting bill, the longtime Houston legislator stayed behind, unable to travel while recovering from a severe illness that led to the amputation of his lower right leg in May. His continued presence in the state makes him more vulnerable to arrest, as Republicans have voted to force back to the Texas Capitol any absent House Democrat within state police jurisdiction.

That prospect doesn't trouble the 59-year-old lawmaker, who questions both the constitutionality and optics of such a move.

SEE ALSO: What it means to break quorum in Texas House of Representatives

What does weigh on him is having no choice but to watch the historic moment from the sidelines. The last time House Democrats skipped town in 2003, to delay political map drawing, Coleman led the way.

"I want to be there," he sighed. "All the people that are in Washington D.C. that are Democrats, this is their Martin Luther King moment, because it's about the Voting Rights Act and the Civil Rights Act."

During a two-hour interview, Coleman alternated between sharp political insight and raw emotion, his hands occasionally trembling against the tires of his new wheelchair.

The Texas Tribune is not revealing Coleman's location while the majority of House Democrats remain out of state, which they have pledged to do until the 30-day legislative special session ends on Aug. 6, depriving Republicans of the quorum needed to pass legislation. In 2003, he said state police showed up at his house and his wife's job looking for him.

A spokesperson for Republican House Speaker Dade Phelan said last week that a "civil arrest warrant" would be issued and carried out with the help of state police for any Democrats believed to have returned to Texas from D.C., but he said he did not know if any orders had been given for quorum-breakers who never left the state. He did not respond to a question Monday specifically about pursuing Coleman.

Last Monday, with GOP-backed voting restrictions, like bans on drive-thru and 24-hour voting, quickly lining up for passage in the special legislative session, more than 51 Democrats of the Texas House's 150 members flew to the nation's capital to bring the chamber to a halt.

The move spawned widespread criticism from Republicans, who have argued their voting bill is meant to strengthen election integrity and "reduce the likelihood of fraud," though there is no evidence of widespread election fraud. Gov. Greg Abbott has threatened to continue calling special legislative sessions until lawmakers vote on his priority issues, like the election bill.

Democrats across the country and advocates for civil rights and racial justice celebrated the quorum break, as many see the voting bill as an attempt to marginalize people of color as Republicans clamor to keep political power in a state with rapidly shifting demographics. In D.C., the Texas lawmakers have used their national spotlight to lobby for federal voting legislation, even if their efforts ultimately fail at home.

For Coleman, a Black man who has served 30 years in the Texas House, the dramatic exodus is more than politics: It's a last-resort measure to counter what he believes are threats to the fundamentals of democracy. In his decades in the Capitol, he has pushed for racial equity in health care, the criminal justice system and political representation.

"People don't believe that you can go backward in time and rights can be retrenched, and they can be," he said.

In a similar moment, Coleman helped lead his colleagues to Oklahoma in 2003, when they fled the state to deter a redrawing of congressional district lines that would dilute Democratic power in D.C. Though the lines were eventually drawn, some Democrats - several of whom are now in D.C. - still felt their political move had a nationwide effect that deterred other states from Republican-centered map-drawing.

"We energized the nation," Coleman said.

Jim Dunnam, a former state representative from Waco was House Democratic Caucus chair at the time. Coleman's role in the 2003 walkout was pivotal, Dunnam said in an interview last week, taking the lead on messaging and explaining the importance of the move to the press and his fellow legislators.

"He was mainly involved in decision making and why are we doing this and how do we communicate why we're doing this," Dunnam said.

Now, Coleman said his colleagues in D.C. are again in a fight for democracy. They are calling for the passage of stalled federal legislation, including one bill that could place Texas, and other states with a history of discrimination against voters of color, back under federal supervision of election laws and redistricting maps.

State Rep. Chris Turner, the current chair of the House Democratic Caucus from Fort Worth, said that, like in 2003, Coleman is still involved in the group's messaging even though he's far away.

"It's been so crazy up here, I admittedly don't feel like I have the best perspective on how things are being portrayed in the news media and social media back in Texas," Turner said Saturday. "Coleman has such a sharp and strategic political mind ... when he tells me things are looking good ... that reassures me."

Coleman said he was told of the planned quorum break the night before, and has since stayed in contact with Turner and other members, while almost constantly watching and reading media reports. Though he feels useful providing an outside perspective, Coleman fought back tears Friday when discussing the solidarity and purpose he felt when he went to Oklahoma in 2003.

"When we look at it as senior members, that's what we remember, that we all came together," he said, his lips quivering with emotion. "We knew that we were doing something that was special and unprecedented for the most part."

Though his health demands it, playing a more passive role and handing the baton to other members is incredibly difficult, he said. Coleman has not been at the Texas Capitol since early May, shortly after he nearly collapsed on the House floor while leading the chamber's opening prayer. He finished his remarks while seated after a fellow member brought the microphone down to him, and then walked out of the chamber leaning on other lawmakers.

After spending nearly a week violently ill, he went to the emergency room where emergency surgery was performed to remove the bottom portion of his leg, overcome with a flesh and bone-eating infection, he said. Coleman, always open to discussing his physical and mental health, said he has lived with bipolar disorder since he was a teen and was diagnosed with diabetes more than a decade ago.

"One thing I've learned is I don't have to be the center of everything ... I can coach a little bit," he said in a soft voice. "What I don't want to do for sure is believe that I'm not going to do the same things that made me sick again."

"At some point, you have to figure out if you want to be alive for another 10 years," he said.

He said Friday he was unsure if he will run for the Legislature again next year. Either way, the lawmaker is determined to dive into the redistricting session expected this fall. While his voice wavered when speaking of his exclusion from the action in D.C. and a potential departure from the Capitol, his tone hardened when he discussed the upcoming map drawing, anticipating a legislative battle like the one which prompted his walkout nearly 20 years ago.

Either with the help of a hired attendant or, ideally, wearing a prosthesis, Coleman plans on being a part of the fight.

"I hope to be back and be in good health and be able to walk on two legs," he said.