KTRK
By Mayra Moreno
HOUSTON (KTRK) -- A restaurant in the Montrose area is getting a lot of attention lately, not because of the food but because of a "rule card" it's handing out to parents.

Ana Beaven and Charlie McDaniel are the couple behind the restaurant called "Cuchara," which means "spoon" in Spanish.

They've invested three years into their Mexican restaurant, which is in the heart of Montrose. Most of the art is from Mexico.

"They are almost impossible to replace," said Beaven.

They open their doors to everyone but there is one warning to parents.

The couple said after many incidents at the restaurant they decided to print the "rules card" and hand them out to parents.

"(During one incident) the child jumped on top of the chair and then started (climbing) up a wall," said Beaven. "(During another incident a) child took a quarter and began marking, doing tick-tac-toe."

That last incident was the last straw, said Beaven. The child caused about $1,500 worth of damage. 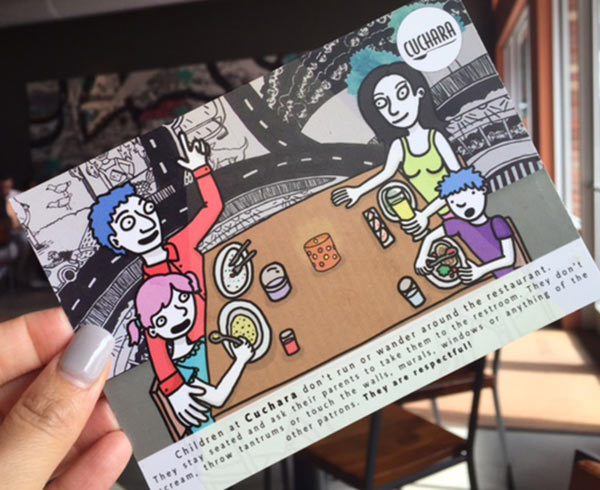 "We had already warned them a few times not to let him run," said McDaniel. The mother, they said, didn't want to take responsibility but eventually she agreed to pay $40 for the paint.

"Of course we got bad reviews on social media from her," he said.

The couple said they understand not everyone will like what they have to say but they said they are looking out for everyone's safety as well.