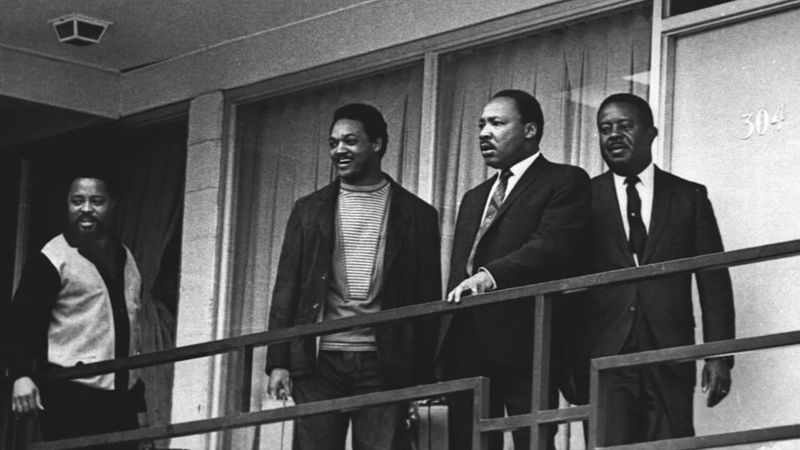 HOUSTON, Texas (KTRK) -- This story was originally published in 2018.

More than 50 years ago, a bullet changed history and tried to stop change.

Dr. Martin Luther King, Jr., was assassinated while planning a march with striking garbage workers in Memphis. Millions mourned the civil rights leader's death, even though his nonviolent movement for civil rights had lost a lot of public support.

But there were some close to King who never lost faith, like Rev. Jesse Jackson, who was standing on the balcony of the Lorraine Motel in Memphis, Tennessee when King was fatally shot by a sniper's bullet, only feet away.

"I lost my mentor and my teacher," Jackson says, admitting he knew instantly that King was dead. "He was hit so hard. It's one of those jarring moments in one's life that you never, never forget. "

A lot changed for the charismatic leader in his final years.

Six months before his death, King's last visit to Houston to raise funds for his struggling movement was a failure. Even big names like Harry Belafonte and Aretha Franklin couldn't draw a sellout crowd, and the people who did arrive ran out when someone put a smoke bomb in the airconditioning system.

By then, many young people had turned from King's nonviolent tactics to the black power movement, which advocated change "by any means necessary." Others said his fervent opposition to the Vietnam War and his focus on his Poor People's Marches meant he'd abandoned the civil rights movement.

One of King's youngest and most loyal followers was John Lewis, now a Congressman representing Georgia. "I met him at 18. He changed my life," he recalls. "I marched with him, went to jail with him. He changed America. If it hadn't been for Dr. King, I don't know where we would be as a people."

When King was assassinated, many of the nation's cities broke out in riots and some leaders feared the civil rights movement was over. But Lewis says King had prepared them all to continue the battle for justice and equality.

"Dr. King taught me to be courageous, to be bold, to be brave, and finally to get in the way," he said, "to make good trouble, necessary trouble, he taught me not to be quiet."

Belafonte recalled King telling him that he'd made peace with death and no longer worried about threats or security. "He wasn't concerned about the length of his life, as much as he was about the quality of his life."

Jackson, who was one of King's closest confidantes, said his shaken leadership realized immediately that they had to keep going. "When the star player is hurt, you don't throw in the towel."

"You dig a little deeper," he said, "and we'd determined you don't let one bullet kill a movement. The dream was bigger than the bullet."

That feeling was echoed by three retired clergymen here in Houston. All are now in their late 80's, and all marched and worked with King, going back more than five decades.

Retired Archbishop Joe Fiorenza was a young priest when he watched in horror as black protestors were attacked by police, while they tried to cross a bridge in Selma, Alabama. It was one of the first times TV cameras had shown how marchers seeking voting rights and following King's creed of nonviolence were being treated by law enforcement.

"Well, you know, this can't be United States of America," he said. And when King called for clergy of all faiths and races to come to Selma and march with him, Fiorenza didn't hesitate. "I thought it was important for religious leaders from Houston to be a part of that and to bring the message back to Houston."

Dr. Virgil Wood was a young pastor in Virginia when he first met King. He ended up working with him for nearly a decade, helping to raise money for the cause. He knew the brilliant leader and charismatic public speaker, but he also knew the private man.

"He was a fun-loving guy. I mean, he loved his ham hocks and food, smoking, he was a chain smoker," Wood laughed, "the good joke, he always had a joke to tell."

Rev. Bill Lawson met King in the mid-60's, after the March on Washington, when he came to Houston to raise money for the civil rights movement. But King got a cold reception from many African American ministers and their congregations.

Black preachers did not want to have anything to do with him," Lawson said. "He was an upstart. J. Edgar Hoover and the FBI had said he was a communist."

What turned out to be King's last speech, at a church in Memphis, now seems prophetic as he talked about his own mortality. "Like anybody, I would like to live a long life. Longevity has its place. But I'm not concerned about that now."

"And I've seen the Promised Land. I may not get there with you. But I want you to know tonight, that we, as a people, will get to the promised land!"

The next evening, the man who preached nonviolence was gunned down, standing on a balcony at the Lorraine Motel.

Fifty years later, the pain is still fresh for these three. Lawson says he was "devastated, but not really shocked."

For Fiorenza, the feeling was "deep sadness, sadness. And I said, 'Oh no,' I just knew that this was a terrible moment in the history of this country."

All three were concerned about whether his death would mean the end of the civil rights movement. Lawson mused, "I feared that. But I think I felt that with the power of his teaching that someone would pick it up and carry it on."

And Dr. Wood responded, "we had not understood that it's not the man, but the plan."

The three say they believe that plan is still being carried out a half-century later, even when our nation seems to be more divided.

Fiorenza says of King, "his greatest legacy, I believe, is he helped us to be true to our ideals and helped us to live by that which America was founded upon."

Lawson likens the marches of the 60's to the student movements of today.