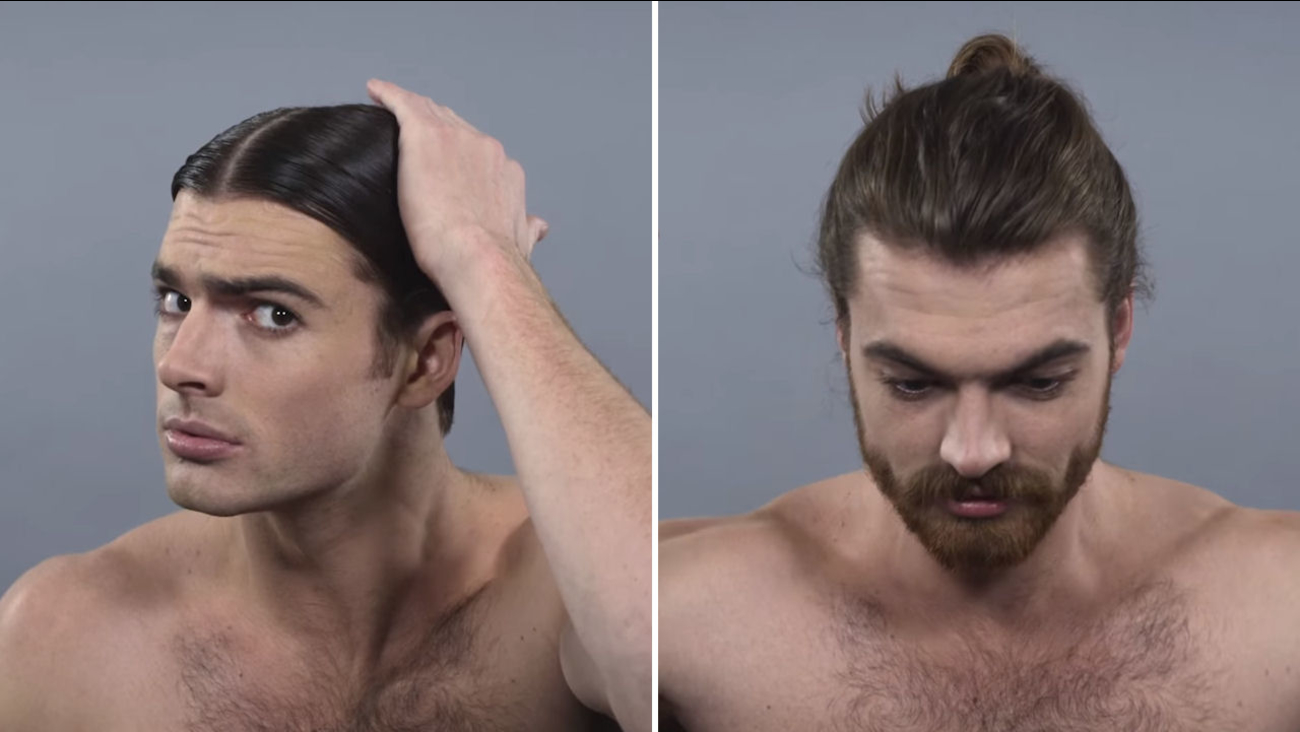 From dapper to ''man bun:'' Cut Video traced the evolution of men's beauty throughout the past century. (WatchCut Video/YouTube)

The "100 Years of Beauty" series has explored decades of hair and makeup trends from countries all over the world, but the latest episode ventures into completely new territory: men's beauty.

For its first look at male beauty standards, the researchers at Cut Video looked at hairstyle trends in the United States over the past century. The video was put together with the help of the Movember Foundation, which encourages men to grow mustaches in the month of November to raise awareness and funds for men's health issues.

Unlike many of their other videos, this video was built around a real hair cut, explained Cut Video researcher Chris Chan in the behind-the-scenes video. Because they only wanted to use the model's real hair (no wigs), they shot the decades out of order.

Here's a closer look at each of the styles and their inspirations.

This decade marked the end of the Edwardian era inspired by King Edward of England. This led to a lot of pomp and circumstance, explained Chan. It also meant the popularity of handlebar mustaches.

The Industrial Revolution spurred widespread use of consumer razors, which meant men could shave more regularly. This put clean-shaven faces in vogue.

The 1930s look was inspired by actor Clark Gable, who played Rhett Butler in Gone with the Wind. He wore a very thin mustache with a sleek hairstyle.

The sailor featured in "V-J Day in Times Square," the iconic photo in Times Square during Victory over Japan Day, was the inspiration for Cut's 1940s look.

Elvis Presley displayed "masculine vanity" and an "almost overt sexuality" that was radical for the time, so the 1950s look was modeled after him.

The 1960s look was modeled after an antiperspirant ad that demonstrated how hippie culture was being commercialized. That model also looked similar to Shaggy from Scooby-Doo, Chan said.

Vietnam War protests were pervasive in the culture of this decade, Chan explained. The movement was associated with a freer look and a lack of shaving and grooming.

To allude to the growth of finance in the 1980s, the model was groomed to look like a man of Wall Street.

The grunge music movement was about refusing to strive for perfection, so the model was much less groomed for the 1990s look. Grunge was also important to Seattle, where Cut Video is filmed.

The model donned a "faux-hawk" to demonstrate a popular style in the 2000s. The look was typical of self-described "metrosexuals" who, in direct contrast to the grunge look, paid careful attention to their hair and looks.

The final look is inspired by the "lumber-sexuals" that have become more common in the past few years, especially in Seattle. These men go for a more natural look with hair long enough to pull back into a "man bun."