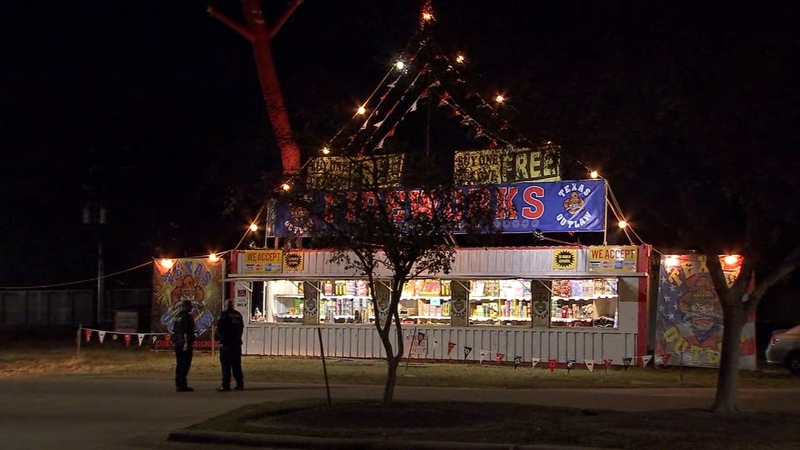 According to a tweet posted by Harris County Sheriff Ed Gonzalez, three to four men tried to rob the stand when two of them were shot by an employee.

@HCSOTexas units are at 4820 SH 6 N. Preliminary info: 3-4 males attempted to rob a fireworks stand. An employee at the location possibly disarmed one of the males and fired shots at them. One robbery suspect is deceased at the scene, another is wounded and being taken to pic.twitter.com/ZGlLJrwUgm

"He's supposed to be stumbling behind the strip center. Possibly 2 shot. One for sure is probably going to be confirmed," dispatchers told paramedics at the scene.

Gonzalez says the employee 'disarmed one of the males' and shot at the suspects.

4 guys tried to rob a firworks stand on #ChristmasEve in NW Harris Co. They brought a gun to do it, @SheriffEd_HCSO says. Stand worker somehow got the gun from them — and shot 2 of the suspects. 1 died. #abc13 https://t.co/BXnqOoP8yP pic.twitter.com/HOLtG2vhNb

"It either results in someone being in prison or someone ending up dead," Gonzalez said. "In this case the owner was, from early indications, trying to protect himself and the location from robbery."

One of the suspects who was shot died at the scene, while the other was sent to the hospital. His condition was not released.

NEW: deputies say this man is 1/4 who tried to rob the fireworks stand. Derrell Ridley, 30. The stand worker shot Ridley and a second suspect. The second suspect died. Ridley is in the hospital. 2 others ran off. #abc13 https://t.co/BXnqOoP8yP pic.twitter.com/e3wL5YvzDd

"Other suspect(s) may have fled the scene," said Gonzalez.

Deputies issued a search for the remaining suspects in the area.

Earlier this summer, a 19-year-old, who also attempted to rob a fireworks stand in north Harris County, died after being shot in the face with his own gun by one of the stand's employees, according to deputies.

READ MORE: Teen who tried to rob fireworks stand dies after being shot in face with own gun