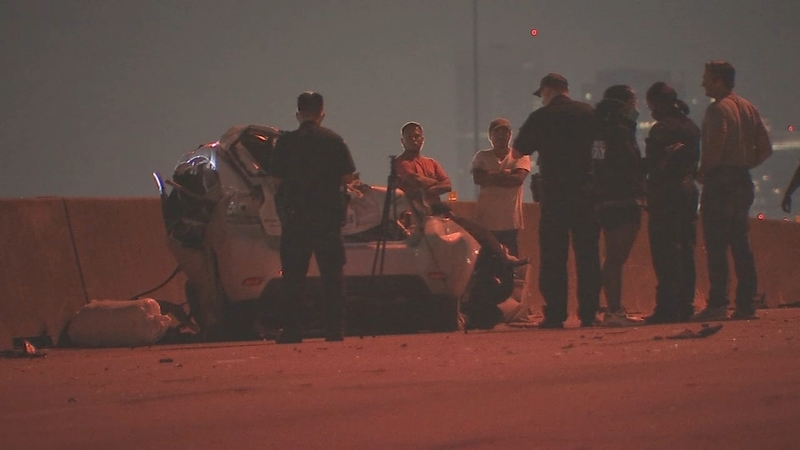 HOUSTON, Texas (KTRK) -- A woman was killed in a suspected DUI crash on the East Freeway on Wednesday, Oct. 14.

The crash, which shut down the freeway for hours, happened around 6:30 p.m. near Wayside.

According to the Harris County Sheriff's Office, the woman was a passenger in a car with an impaired man who was driving too fast in the westbound lanes.

The man then clipped another car, causing his vehicle to flip across four lanes of traffic before slamming into the dividing wall of the freeway, killing the woman.

The suspected impaired driver was taken into custody. It's unknown what substance he was under the influence of, but the investigation is ongoing, officials said.


Everitt was charged with murder after the crash.

Everitt tells ABC13 that his dog named Bobo was also killed in the accident.

Crashes like these are now the focus of a new push from TxDOT to try to keep everyone safer on the roads.
It's called the Selective Traffic Enforcement Program and funnels more money to local law enforcement agencies, so they can pay their officers overtime to patrol the streets and freeways looking for impaired or distracted drivers.

Sean Teare with the district attorney's office explained more about the program.


"In that light, TxDOT has given the DA's office a new grant specifically aimed at going backwards and looking for the areas and people that contribute to these crashes before they get on the roads. And so, we're going to redouble our efforts in that fashion as well to try to curb the carnage we're seeing on the roads," Teare said.

The district attorney's office has accepted a felony murder charge for the suspect. The charge carries a minimum of five years up to a maximum of life in prison.